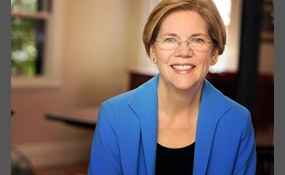 In an election between Scott Walker and Elizabeth Warren who would you support?

Elizabeth Ann Warren is an American academic and politician, who is the senior United States Senator from Massachusetts and a member of the Democratic Party. She was previously a Harvard Law School professor specializing in bankruptcy law. Warren is...  an active consumer protection advocate whose work led to the conception and establishment of the U.S. Consumer Financial Protection Bureau. She has written a number of academic and popular works, and is a frequent subject of media interviews regarding the American economy and personal finance.In the wake of the 2008 financial crisis, Warren served as chair of the Congressional Oversight Panel created to oversee the Troubled Asset Relief Program. She later served as Assistant to the President and Special Advisor to the Secretary of the Treasury for the Consumer Financial Protection Bureau under President Barack Obama. In the late 2000s, she was recognized by publications such as the National Law Journal and the Time 100 as an increasingly influential public policy figure.In September 2011, Warren announced her candidacy for the U.S. Senate, challenging Republican incumbent Scott Brown   more
5 votes
2 comments
Elizabeth Warren - Voter Comments

discomfiting says2014-05-31T21:08:13.1499714-05:00
Report Post
She actually studied economics for a long time, wrote books on economics and the economy; the healthcare system and actually knows what she's talking about and she actually knows how to get things done; which is why in less than 4 years of being a politician, she already has a lot of people telling her to run for president and has a national notoriety that takes other decades to get.