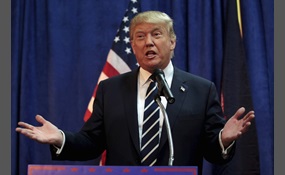 Is the American public not quite sick enough yet of having to be politically correct? Could Trump bring a no nonsense approach back if elected?

I feel deeply disappointed on so many levels of what this country has become. I, personally, don't like being muted on my speech, thoughts, and actions. I'm tired of having the small minority of this country, change traditions, remove the word Christmas from our holiday, see our president stand back in times the world needs us. Would Trump bring back these essential building blocks of this country?

It's just an excuse to outright lie about facts.

"Could Trump bring a no nonsense approach back if elected?" Don't make me f_cking lough.
7 votes
2 comments
It's just an excuse to outright lie about facts. - Voter Comments

Hawlucha says2015-09-11T09:24:45.8041888Z
Report Post
Trump is only saying sensational things and using Freedom of Speech as an excuse. Trump is inconsiderate of the backlash he may face. He's provoking a negative opinion on him.

Black-Jesus says2015-09-12T01:14:21.3971573Z
Report Post
Well, to address the statements made in the description: the minority isn't the one changing traditions, the majority is; the majority of America supports changing of tradition in some sorts. And changing traditions isn't inherently bad, it was tradition to have a monarchy, America was one of the first democracies, slavery was a tradition, it was abolished, segregation was a tradition, it was also abolished, not all traditions are good, and most traditions, after time has passed, become bad because the values of the people change over time. Then there are people that are trying to politically correct us, and well, I agree that those people are bad, but I seriously doubt that Trump is going to do anything about that. And our president stepping down when the world needs us? What are you talking about? Most people that complain about Obama not trying to get us involved further in the Middle East agree that something needs to be done about the economy, yet want us to spend even more money on the most costly thing a country can spend money on: war. Trump and most republicans want to "fix the economy" by "running the country like the company", and yet, there are two things wrong with this: the country isn't a company and can't be accurately compared to it, so it shouldn't be run like one and they don't want to cut out the most costly, pointless expenditure we have. The wars are completely useless, not our problem and the biggest drain on our economy, and yet people like Trump want to keep at it! And plus, Trump is definitely not going to bring a "no-nonsense" policy, as he is entirely nonsensical.
Vote & Comment
2

I'm sick of people making polls about Trump. For real, cut it out for awhile.

1 vote
0 comments
I'm sick of people making polls about Trump. For real, cut it out for awhile. - Voter Comments
No Comments
Vote & Comment
3

Trump would bring to the public as well as our liberal government friends (friends used VERY loosely LOL), a personality of "Tell it how it is." The problem is, instead of using the opportunity as a chance to reverse the ignorant and m0ronic, rece... ntly adopted "Politically Correct" speech and actions culture; the liberal politicians and news outlets would instead use the opportunity to bash Trump and the Republican Party, most likely labeling everyone as racists, sexists, compassion-less, cavemen, etc., etc., etc. || After all, let's face it; modern Americans spend exponentially more time each day looking for things to complain about, looking at everyone else for excuses for their own failures, looking for easy money, looking for ANY micro reason including ways to falsify reasons to sue another person or company, etc.; exponentially more time spent on excuses and ways to become lazier than they spend time on ways of bettering themselves as individuals, citizens, people, or even simply as human beings. Until society starts taking responsibility for themselves and their choices in life, this "Politically Correct" culture is just going to keep exploding and growing exponentially. I mean really...I can't call a fat slob as I see it anymore...A fat slob; instead, I have to refer to them as "Obese" or "Overweight". I just saw a promotion on TV for a new show on TLC (The Learning Channel) for a lady so fat it made me sick to my stomach to watch her. Thinking it would be a show about self control, moderation, the dangers of obesity, and how important it is to lose weight; I decided to research the show. Turns out the 400 pound fat lady has PCOS which causes weight gain...But it is NOT permanent or irreversible; it simply takes a healthy diet and exercise which the "star" of the new show CLEARLY lacked (as can be gleaned from here blogs and autobiographies), leading to what she is now. So we went from Honey Boo Boo's fat a$$, her mother's Jabba the Hutt, earthworm looking fat a$$, and her father's thieving, arsonist, child abusing, attempted murdering, stereotypical redneck stupid a$$; to a 400 lb fat lady who instead of being ashamed of her disgusting appearance and getting serious about weight loss, dieting and exercise, instead goes on TV to show the world about her "Fabulous Fat Life". I mean come on man. Where's the shame? Now that I am typing all of this out, I honestly don't see a way for society to come back to reality and normality. If we are seriously at the point where a 400 lb fat a$$ can be proud enough of her disgusting, nauseatingly flabby body to go on national, cable TV and seriously smile and be happy about showing herself off and telling the world that she is "fabulously fat"; if we are at the point where we nationally televise and celebrate a fat a$$, m0r0nic redneck family consisting of 4 children from 4 different fathers, one of which is still unknown, the other three plus the mom sporting felony wrap sheets that would make a common street thug deuce his pants, including one of the fathers being on the national sex registry for sexual exploitation of a minor, not to mention another father jailed for lighting a random person on fire, and don't let us forget the 8 year old girl too fat to make weight for the high school wrestling team; we have little to no chance of return at this point.....Good luck world   more
1 vote
0 comments
Ehhhhhh.....A Strong MAYBE - Voter Comments
No Comments
Vote & Comment
5

Trump's getting popular for saying things the public finally likes, but I assume the things he'll do as President will be reviled, especially in the first-generation breed of US citizens losing their family to Trump's anti-immigration stances.

0 votes
0 comments
Trump's getting popular for saying things the public finally likes, but I assume the things he'll do as President will be reviled, especially in the first-generation breed of US citizens losing their family to Trump's anti-immigration stances. - Voter Comments
No Comments
Vote & Comment
6

Heterodox says2015-09-12T00:51:28.3163269Z
Report Post
@reece Crime rises when more people engage in criminal acts or when more are reported and/or caught. People are responsible for their own actions.

chandlerrouse says2015-09-15T04:03:27.3623369Z
Report Post
There is much unjustified hatred in the world. There is justified hatred of the USA. Much of this arises from the victimization complex that sweeps much of mankind. Whoever is in charge, whoever is powerful or successful will also be hated. This vexing hatred often evaporates quickly with a little reason or thought. There are many reasons some invalid, unjustified criticisms. The most widespread hate is the hate by people the world over who fall victim to their own shortcomings, and want a reason why Americans can't control their scapegoating.