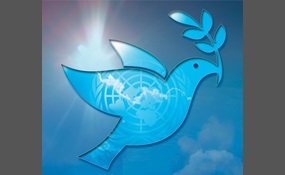 In united nation when veto power is only with 5 countries ,is it really doing justice to its motto of world peace and equality.....

Yes, though not really effective or efficient, the UN does indeed try to promote world peace

11 votes
4 comments
Yes, though not really effective or efficient, the UN does indeed try to promote world peace - Voter Comments

stargate says2015-08-07T20:23:13.3553043Z
Report Post
We need to go one step further, now this may not be so peaceful but just listen to me. We need to attack nations that support terrorism, and have a corrupttion rate above 50%. We need to stop rape, mass killings of civilians, murder, slave trade. This can only be achieved though war, the UN has failed. Look we have had more terrorism, and slave trade these past years then we ever have. Rape is happening more and more often. We can no longer sit back and let them do what they want.

Heterodox says2015-08-09T09:02:19.5325003Z
Report Post
Depends really what you mean by peace. If you consider killing people in an effort to force peace (control) then yes they are certainly trying to promote peace. If you asked me if the UN was a peaceful organization, ie nonviolent, my answer would be a resounding no.

Yes it has lost its accountiblity

The United Nations is an intergovernmental organization established 24 October 1945, to promote international co-operation. A replacement for the ineffective League of Nations, the organization was created following the Second World War to prevent a... nother such conflict. At its founding, the UN had 51 member states; there are now 193. The headquarters of the United Nations is situated in Manhattan, New York City, and enjoys extraterritoriality. Further main offices are situated in Geneva, Nairobi and Vienna. The organization is financed by assessed and voluntary contributions from its member states. Its objectives include maintaining international peace and security, promoting human rights, fostering social and economic development, protecting the environment, and providing humanitarian aid in cases of famine, natural disaster, and armed conflict.During the Second World War, US President Franklin D. Roosevelt initiated talks on a successor agency to the League of Nations, and the United Nations Charter was drafted at a conference in April–June 1945; this charter took effect 24 October 1945, and the UN began operation   more
2 votes
0 comments
Yes it has lost its accountiblity - Voter Comments
No Comments
Vote & Comment
3

No its not so

1 vote
0 comments
No its not so - Voter Comments
No Comments
Vote & Comment
Leave a comment...
(Maximum 900 words)

imabench says2015-08-07T20:43:46.1959690Z
Report Post
Free thinker were you dropped on your head as a baby or actually thrown against the wall because I would like to know how you turned out as retarded as you did

stargate says2015-08-07T20:49:26.4185499Z
Report Post
True, but we come in fix the place up. Then leave if these crimes keep on happening. Then we keep on coming back. Until they know that all human life is important, and that they should not do those crimes. I know this is a long fight, I know I am the only one here who would support such a war. But it is a war for the better future of all human kind.