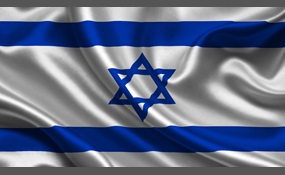 Jews: Do you support the State of Israel or Palestine?

The State of Israel is a controversial topic of which many stances exist. Jews, often the "People of Israel," generally have a predictable stance. However, it may or may not be more complicated than it seems.

Israel, officially the State of Israel, is a country in Western Asia, situated at the southeastern shore of the Mediterranean Sea. It shares land borders with Lebanon to the north, Syria in the northeast, Jordan on the east, the Palestinian territor... ies comprising the West Bank and Gaza Strip on the east and southwest, respectively, and Egypt and the Gulf of Aqaba in the Red Sea to the south. It contains geographically diverse features within its relatively small area. Israel's financial center is Tel Aviv, while Jerusalem is the country's most populous city and its designated capital, although Israeli sovereignty over Jerusalem is not recognized internationally.On 29 November 1947, the United Nations General Assembly recommended the adoption and implementation of the Partition Plan for Mandatory Palestine. The end of the British Mandate for Palestine was set for midnight on 14 May 1948. That day, David Ben-Gurion, the Executive Head of the Zionist Organization and president of the Jewish Agency for Palestine, declared "the establishment of a Jewish state in Eretz Israel, to be known as the State of Israel," which would start to function from the termination of the mandate   more
11 votes
5 comments
Israel - Voter Comments

I am a Zionist (pro-Israel)

You are a Jew who supports the current State of Israel and the Zionist agenda.
6 votes
2 comments
I am a Zionist (pro-Israel) - Voter Comments

Jonas16 says2015-08-08T17:51:47.9612389Z
Report Post
Israel was created so that never again Jews could be persecuted and slaughtered, Israel was created so that Jews could come to their historic and cultural homeland and live peacefully. Today Israel is a vibrant free-market democracy, a beacon of human rights and freedom in the middle of a region lacking those things, and it's a leader in science, innovation, hi-tech. I, as a Jew, Zionist and Israeli will always be willing to work with the Palestinians to create just and lasting peace. Remember that being staunch pro-Israel and Zionist doesn't mean you oppose peace and ultimately, a two-state solution.

I am for a peaceful two-state coexistence

You support both Palestine and Israel coexisting together peacefully with the current or a similar to the current border situation.
6 votes
1 comment
I am for a peaceful two-state coexistence - Voter Comments

I am anti-Zionist (pro-Palestine)

You are a Jew who supports Palestine and not the State of Israel.
3 votes
0 comments
I am anti-Zionist (pro-Palestine) - Voter Comments
No Comments
Vote & Comment
5

They are both religiously lead governments, which makes any problem you have worse not better.
1 vote
0 comments
Both bad - Voter Comments
No Comments
Vote & Comment
6

I am a member of/support the Neturei Karta or similar

You are a Jew against Israel for traditional religious reasons, etc.
1 vote
0 comments
I am a member of/support the Neturei Karta or similar - Voter Comments
No Comments
Vote & Comment
7

You aren't informed about the situation, or don't care to take a stance at this time.
0 votes
0 comments
I couldn't care less - Voter Comments
No Comments
Vote & Comment
Leave a comment...
(Maximum 900 words)

tommytom says2015-08-08T18:20:34.6519215Z
Report Post
Out of respect, I will not vote as I am not Jewish. However, I personally believe that a two-state solution is the best, most peaceful and fair solution at this time.

DavidMGold says2015-08-08T18:36:28.1188323Z
Report Post
On the "member of/supporter the Neturei Karta" selection, there numbers are put no higher than 5,000 and are consider extreme by the Haredi community. Infamous, are the 100 or so kapos that prostitute themselves for money to the world's vilest anti-Semites with their picture becoming Jew hating propaganda disseminated on social media in the relentless campaign to demonize Israel. Ironically, these so-called "true Torah Jews" follow the Babylonian Talmud and sale their services on the Sabbath. They're 0.036% of the Jewish population, crackpots, made famous by Jew haters around the world.

DavidMGold says2015-08-08T18:45:45.9257391Z
Report Post
Tajshar2k, your premise is absurd in my view. Actually, the two state solution has already been attempted and that state is called Jordan. The British gave away and gifted over 80% of the original mandate for a Jewish homeland to the Kingdom of Saud.

tajshar2k says2015-08-08T20:05:17.6849066Z
Report Post
But, I suppose oppressing a ethnic group, and taking away their land is a better idea? I think we need to realize their are faults on both sides. I understand we need Israel for other reasons, but ignoring whats going on in Palestine is not the solution.

Varrack says2015-08-08T20:12:50.1329925Z
Report Post
A 2 state solution is just so retarded. Palestine and Israel are not just going to "shake hands" and live in peace after thousands of years of conflict that is so deeply rooted. Try telling a suicide bomber terrorist to calm down and live in peace with the people they have always hated - it's not going to work.

DavidMGold says2015-08-08T20:27:42.3183116Z
Report Post
Tajshar2k, suppressing an ethnic group? Where to begin? The Jews have faced unrelenting hatred, persecution, and threats of destruction. Upon declaring independence in 1948, on that very day, Arab monarchies and dictatorships banded together to invade and destroy the state of Israel. Their efforts continued on reaching a low point in 1967 when Israel's spectacular victory in the Six Days War. It was at this time the Arabs begin positing the myth of a Palestinian people to counter the Israeli identity. I will refuse your relativistic assumption about the faults applying to both sides. You ignore the genocidal Jew hatred and the Islamic supremacism that are explicitly stated as the motivating factors for the conflict and the only fault you find is that Israel has successively defended itself rather than meeting the fate of the Copts in Egypt, Armenians, Assyrians, or other ethnic minorities.

DavidMGold says2015-08-08T20:31:43.3242565Z
Report Post
@Varrack - it doesn't work because becoming Shaheed, killing the enemy while killing yourself, is considered a supreme value among Hamas with the Qu'ran and the Sunna promising them the greatest reward in paradise. It doesn't work because Muslims believe (and this is in Hamas' charter) that according to Muhammad the Muslims must genocide the Jews (make a great slaughter) in order for the Final Hour and Judgement Day to come.

Emilrose says2015-08-09T11:58:27.2142732Z
Report Post
Lol, you mean 'take even more land' that is *not* actually legally designated to a Palestinian state in the first place? If you're going to criticize, at least know about the topic beforehand.

tajshar2k says2015-08-09T12:06:53.2971173Z
Report Post
Emilrose, when you have a family living on that land, and it suddenly get taken away under the premise "its not actually yours" what exactly do we do with the people who's land were taken?

Emilrose says2015-08-09T14:00:35.5915699Z
Report Post
Again that does nothing to actually adresss the *legality* of anything. Simply living in/on a land doesn't mean it is technically 'yours' or that you have any governmental control over it. I acknowledge that the situation [overall] has been improperly dealt with, by Israel AND other Middle Eastern countries--but once more, that is irrelevant to whether it was a sovereign Palestinian state that belonged only to Palestinians. Which of course, it wasn't and didn't.

tajshar2k says2015-08-14T23:51:59.7496081Z
Report Post
You are talking about the legality. I think if you really ask yourself whom it really belonged too, you would choose different. Again, I know this meaning nothing, because it isn't legally theirs, but in your mind, you know whats going on.
Privacy Policy | Terms of Use
Sitemap | View Desktop Version
©2021 Debate.org. All rights reserved.