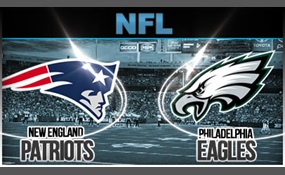 Who do you think will win Super Bowl 52?

CatalyticConvertersRule says2018-01-25T05:22:36.6122081Z
Report Post
Let me state that I do not think that the Eagles will win, however; this *******SHOULD BE******* what should occur. First off, well over 300,000,000 legals, plus the "illegals," should be cheering for PHILADELPHIA. Yes, that's three hundred Million. New England, and all Bwahstin (Boston) area teams are nothing but scum, fa&s, and cheaters. All 4 of them - the Red Cox, the Broons, Patriots, and Celtics get free passes to the playoffs every ******* season. Every **** season. Why? $. And, they play in the North, NORTH-EAST where all the $ and jew are. That is correct. Now, onto the rest of the facts for today. There is a HELLUVA lot more to this game than the Eagles vs. America's makeshift/wannabe/cheating/arrogant/cocky/pretend "God" complex Brady,Belichick & the pretend robot & steroid-laden Gronkowski. Anyone who has watched football since the early 90's knows that football is rigged. Buffalo losing 4 straight Superbowls and one with a chip shot field goal is horse ****. The only difference between the NFL & WWE is that at least the WWE came out and admitted that it was no longer the WWF, it was World Wrestling Entertainment. The so called "Pats" have been given a FREE PASS since 2001. Ever since 2001, the NFL has been helping New England (which is basically Boston - or pronounced locally as Bwahstin - i.e. the fake "Bwahstin smoke bwahmin'," etc. (Similar to a New York accent, but locals can tell the subtle differences.) *The gigantic cheating play which occurred in this Superbowl held up for THIS GAME in 2001 ONLY as the nip and tuck rule was instituted next season, Brady has basically had the easiest career of any athlete I have ever seen - but that's only my opinion. Essentially, what the JU.S.A. is going through right now; with man made fires in California being ignored, man made hurricanes in TX, P.R., Louisiana, Virgin Islands, Cuba, etc., it's beyond fathomable that an entire country can even allow "A GAME" to be the most "important" 'event' during this time. The "nip & tuck" rule. (The Brady Rule, basically.) E.G. 'Brady is the only guy who's allowed to get hit like a girl, fall, lose the ball, and have the REFS state that the Patriots will retain the ball!!!!!!!!!!!!!!!!! AFTER a CLEAR fumble!!! <<< A similar play happened to Ben Roethlisberger a few weeks ago but he held onto the ball. This year? New England was flat out GIVEN 3 games for free. They didn't even have to TRY and they still won. PIT should have beat them. Buffalo. And some other team. *****DEFLATEGATE. Yep. The NFL allows their "God" inflate the balls beforehand to the P.S.I. that he wants. No other Q.B. gets this treatment. *****28-3 late in the 3rd Quarter. I'm sorry? But the CLEVELAND ***********NG BROWNS would have protected that lead. Nah, eh? Don't think so? That's like a 7-1 lead in hockey. Late. Or a 100-61 lead in the NBA. LATE. Baseball - 20-7. Seventh Inning Stretch. *******You're NOT playing the Patriots. You're playing THE REFS/PATRIOTS AND VEGAS. That is a FACT right there. Now, America. It's time for you to wake the hell up. There are WAY more important things for you to worry about than football. You had better be ready for the JEW.N. - or U.N. / EW.N. / JU.N. to come down the streets of the JU.S.A. with fake, "Israeli" coward troopand blame it on you; or better yet - I.S.I.S.! The Israeli Secret Intelligence Service. Just look it up on JewTube or Joogle it. You'll see the video from the damn 80's FFS and FCOL... It will probably be another mother******* lead for Philly in the 2nd half - then of course, Tom Bradie, and either late flags vs. Philly, or earlier ones which didn't allow Philly to get a huge lead, will have the effect that the Freemasons/Illuminati and Vegas all want. HUUUUUUUUUUUUGE $$$$ on the line for this buffoonery. Meanwhile? America? They are burning you every which way they can. From man made hurricanes all summer, to man made so called "wildfires" which pop up out of nowhere that will lead to MARTIAL LAW and JU.N. troops in your streets. But, I know. We need to be entertained, right? Oh, in a few days after February 4th, you'll forget alllllllll about Justin ******g Timber*******lake; trust me. And with that? Remember. Pittsburgh has 6 out of 8. No cheating needed there. No refs. No Steelers fan thought they would EVER say this but Let's Go EAGLES vs. the refs/Patriots. Now, well over 400,000,000 North Americans - legal or not - know that I'm right.