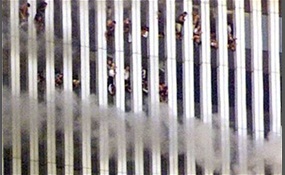 On that day, all America really saw was two planes that hit the second tower. One plane had an attachment to the bottom that commercial airlines never have. At the Pentagon, we never see a plane even though the building and streets are covered in cameras. In PA, we never see anything at all.

You are wrong, we have clear pictures of the plane that crashed in PA and at the Pentagon.

8 votes
1 comment
You are wrong, we have clear pictures of the plane that crashed in PA and at the Pentagon. - Voter Comments

SweetTea says2014-07-02T19:00:17.1671315-05:00
Report Post
The impact of the jet into the Pentagon was caught, by a parking lot camera & made public. I don't recall any clear footage of the first jet hitting the WTC, but I was watching when the second hit. Most media cameras were already focused on the building, after the first impact. As for Pennsylvania ... it is anyone's guess what happened to that aircraft!
Vote & Comment
2

You are right, we only see two planes and the rest we were told.

6 votes
0 comments
You are right, we only see two planes and the rest we were told. - Voter Comments
No Comments
Vote & Comment
Leave a comment...
(Maximum 900 words)

1814Username says2014-07-02T18:35:40.0483762-05:00
Report Post
Ah, to the person who voted that I was wrong. Please tell me where I can find a picture of a plane crashing in PA and one at the Pentagon. I want to see the actual plane. Not some photo of a hole with garbage in it or some pieces of wreckage you cant identify. PA was amazing. First time in history the ground swallowed a 757 whole. The Pentagon was equally amazing. Video exists of a reporter saying there is no sign of a plane and a perfectly manicured front lawn. That is some amazing flying considering amateurs flew a 60 ton plane at 500 mph at basically 10 feet off the ground. Amazing. I wonder how those terrorists failed their single engine plan examination at the flight school. And please do not tell me that the terrorists overrode the flight control systems and autopilot. That is really complex software. It is not like programming your GPS for your Chevy.

Charliemouse says2014-07-04T09:35:38.1735673-05:00
Report Post
I think 9/11 was real but it was caused by the govt. The people are looking down at the grenades at the base exploding. The plane may have not been a plane, or it was have been only one plane and then was exaggerated to be more than that. America is lying to you all the damn time. And those with half a brain who know the truth or think outside the box called TV are a minority therefore the govt doesn't care how crappy their fake conspiracy is. Throw it at the people and they'll lap it up without checking twice