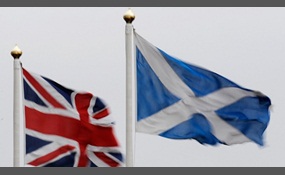 Should Scotland become an independent nation?

I know the question is old, but my country is becoming very nationalist, and the interest of independence since the referendum has been on the rise (Now with 59% who would vote for independence in another referendum) But what do you think?

Scotland should remain in the United Kingdom.
10 votes
3 comments
No - Voter Comments

IseWll says2015-02-28T14:57:56.9981657-06:00
Report Post
The fact that in the September 2014 referendum, the majority of Scots, although it was tight, said no is saying something. Also, as was said by the "Better Together" campaign, Scotland and the rest of the UK share a rich history and breaking up would be almost neglecting the country's past.
Vote & Comment
No comments yet.
Leave a comment...
(Maximum 900 words)
Privacy Policy | Terms of Use
Sitemap | View Desktop Version
©2021 Debate.org. All rights reserved.