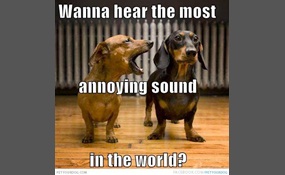 What is most annoying

Homework, or homework assignment, refers to tasks assigned to students by their teachers to be completed outside the class. Common homework assignments may include a quantity or period of reading to be performed, writing or typing to be completed, p... roblems to be solved, a school project to be built, or other skills to be practiced   more
7 votes
0 comments
Homework - Voter Comments
No Comments
Vote & Comment
2

Pop music is a genre of popular music, which originated in its modern form in the 1950s, deriving from rock and roll. The terms "popular music" and "pop music" are often used interchangeably, even though the former is a description of music which is...  popular.As a genre, pop music is extremely eclectic, often borrowing elements from other styles including urban, dance, rock, Latin and country; nonetheless, there are core elements which define pop. Such include generally short to medium-length songs, written in a basic format, as well as the common employment of repeated choruses, melodic tunes, and hooks.So-called "pure pop" music, such as power pop, which has been described as mixture of hard rock and melodic pop music and tends to be more aggressive than pop rock, features all these elements, using electric guitars, drums and bass for instrumentation   more
4 votes
1 comment
Pop music - Voter Comments

People who dress up like G's and pretend they are one when they live in suburbia ;)
4 votes
0 comments
Fake Gangstars - Voter Comments
No Comments
Vote & Comment
Leave a comment...
(Maximum 900 words)