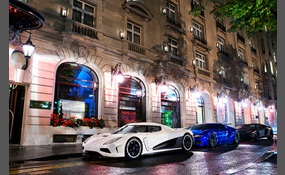 What is Your Favorite Performance Car Brand?

Automobili Lamborghini S.P.A. Is an Italian brand and manufacturer of luxury sports cars and, formerly, SUVs, which is owned by the Volkswagen Group through its subsidiary brand division Audi. Lamborghini's production facility and headquarters are l... ocated in Sant'Agata Bolognese, Italy. In 2011, Lamborghini's 831 employees produced 1,711 vehicles.Ferruccio Lamborghini, an Italian manufacturing magnate, founded Automobili Ferruccio Lamborghini S.P.A. In 1963 to compete with established marques, including Ferrari. The company gained wide acclaim in 1966 for the Miura sports coupé, which established rear mid-engine, rear wheel drive as the standard layout for high-performance cars of the era. Lamborghini grew rapidly during its first decade, but sales plunged in the wake of the 1973 worldwide financial downturn and the oil crisis. The firm's ownership changed three times after 1973, including a bankruptcy in 1978. American Chrysler Corporation took control of Lamborghini in 1987 and sold it to Malaysian investment group Mycom Setdco and Indonesian group V'Power Corporation in 1994   more
4 votes
1 comment
Lamborghini - Voter Comments

Automobiles Ettore Bugatti was a French car manufacturer of high-performance automobiles, founded in 1909 in the then German city of Molsheim, Alsace by Italian-born Ettore Bugatti. Bugatti cars were known for their design beauty and for their many ... race victories. Famous Bugattis include the Type 35 Grand Prix cars, the Type 41 "Royale", the Type 57 "Atlantic" and the Type 55 sports car.The death of Ettore Bugatti in 1947 proved to be the end for the marque, and the death of his son Jean Bugatti in 1939 ensured there was not a successor to lead the factory. No more than about 8000 cars were made. The company struggled financially, and released one last model in the 1950s, before eventually being purchased for its airplane parts business in the 1960s. In the 1990s, an Italian entrepreneur revived it as a builder of limited production exclusive sports cars. Today, the name is owned by German automobile manufacturing group Volkswagen   more
3 votes
0 comments
Bugatti - Voter Comments
No Comments
Vote & Comment
4

Pagani Automobili S.P.A. Is an Italian manufacturer of sports cars and carbon fibre. The company was founded in 1992 by the Argentinian Horacio Pagani, and is based in San Cesario sul Panaro, near Modena, Italy.
2 votes
0 comments
Pagani - Voter Comments
No Comments
Vote & Comment
6

Ferrari S.P.A. Is an Italian luxury sports car manufacturer based in Maranello. Founded by Enzo Ferrari in 1929, as Scuderia Ferrari, the company sponsored drivers and manufactured race cars before moving into production of street-legal vehicles as ... Ferrari S.P.A. In 1947. Fiat acquired 50% of Ferrari in 1969 and expanded its stake to 85% in 2008. In 2014 Fiat announced its intentions to sell its share in Ferrari, as of the announcement Fiat owned 90% of Ferrari. Throughout its history, the company has been noted for its continued participation in racing, especially in Formula One, where it has had great success. Ferrari road cars are generally seen as a symbol of speed, luxury and wealth   more
1 vote
0 comments
Ferrari S.P.A. - Voter Comments
No Comments
Vote & Comment
7

McLaren Automotive, commonly referred to as McLaren, is a British automotive manufacturer of high-performance vehicles. The company was established as McLaren Cars in 1989 as a producer of road cars based on Formula One technology. It works closely ... with McLaren Racing, the Formula One constructor, and is a spinoff of McLaren Group   more
1 vote
0 comments
McLaren Automotive - Voter Comments
No Comments
Vote & Comment
9

Marussia Motors was a Russian sports car manufacturer founded in 2007. It was the first Russian manufacturer of super sports cars. It designed, developed and produced the B1 and the B2 sport cars in Russia. Marussia was led by former motor racer Nik... olai Fomenko. The Marussia B1 was launched in December 2008 in the new Manege hall in Moscow.In 2010, it acquired a "significant stake" in the Virgin Racing Formula One team, which was later renamed Marussia F1 from 2012 and competed in Formula One until 2014.In April 2014, the Marussia Motors company was disbanded, with staff leaving to join a government-run technical institute. The Marussia F1 team continued unaffected as a British entity independent of the Russian car company. However, after filing a notice in the London High Court intending to assign an administrator on 7 October 2014 due to financial difficulties, exactly a month later the appointed administrator announced that Marussia F1 had also ceased trading and folded   more
1 vote
0 comments
Marussia Motors - Voter Comments
No Comments
Vote & Comment
10

Alfa Romeo Automobiles S.P.A. Is an Italian luxury car manufacturer. Founded as A.L.F.A. On June 24, 1910, in Milan, the company has been involved in car racing since 1911. It was owned by Italian state holding company Istituto per la Ricostruzione ... Industriale between 1932 and 1986, when it became a part of the Fiat group. In February 2007 the Alfa Romeo brand was transformed into the current Alfa Romeo Automobiles S.P.A., a subsidiary of Fiat Group Automobiles S.P.A..The company that became Alfa Romeo was founded as Società Anonima Italiana Darracq in 1906 by the French automobile firm of Alexandre Darracq, with some Italian investors. In late 1909, the Italian Darracq cars were selling slowly and the Italian partners of the company hired Giuseppe Merosi for designing new cars. On June 24, 1910, a new company was founded named A.L.F.A., initially still in partnership with Darracq. The first non-Darracq car produced by the company was the 1910 24 HP, designed by Merosi. A.L.F.A. Ventured into motor racing, with drivers Franchini and Ronzoni competing in the 1911 Targa Florio with two 24 hp models   more
0 votes
0 comments
Alfa Romeo - Voter Comments
No Comments
Vote & Comment
Leave a comment...
(Maximum 900 words)

gabep says2015-09-07T15:09:34.6328052Z
Report Post
@ramm5555 - Audi is not a performance manufacturer. Although there are some performance models such as the S and RS series, or the R8, the majority of their cars are not performance cars. Thus, it is not exactly a performance brand.
Privacy Policy | Terms of Use
Sitemap | View Desktop Version
©2021 Debate.org. All rights reserved.