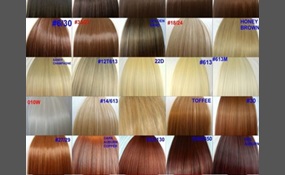 What is your hair color?

Brown hair is the second most common human hair color, after black hair. It varies from light brown to almost black hair. It is characterized by higher levels of the dark pigment eumelanin and lower levels of the pale pigment pheomelanin. Its strand... s are thicker than those of fair hair but not as much as those of red hair. Girls or women with brown or black hair are often referred to as brunette, which in French is the feminine form of brunet, which is the diminutive of brun.Brown hair is common among populations in Western world, especially among those from Central Europe, Southern Europe, United States and also some populations in Greater Middle East where it transitions smoothly into black hair. Brown hair is common among Australian Aborigines and Melanesians   more
11 votes
1 comment
Brown hair - Voter Comments

Black hair is the darkest and most common of all human hair colors globally. It is a dominant genetic trait, and it is found in people of all backgrounds and ethnicities. It has large amounts of eumelanin and is less dense than other hair colors. So... metimes very dark brown hair is mistaken for black because the potency of eumelanin in the hair gives it the lustrous properties of black hair, using the rationale that "brown" does not do the darkness of the shade justice. Black hair is known to be the shiniest of all hair colors. In English, black hair is sometimes described as "soft-black", "raven black", or "jet-black". The range of skin colors associated with black hair is vast, ranging from the palest of white skin tones to black skin. Black-haired humans can have dark or light eyes   more
7 votes
0 comments
Black hair - Voter Comments
No Comments
Vote & Comment
3

Of a flaxen or golden color or of any light shade of auburn or pale yellowish brown.
2 votes
0 comments
Blond - Voter Comments
No Comments
Vote & Comment
4

Red hair occurs naturally in 1–2% of the human population. It occurs more frequently in people of northern or western European ancestry, and less frequently in other populations. Red hair appears in people with two copies of a recessive gene on chro... mosome 16 which causes a mutation in the MC1R protein.Red hair varies from a deep burgundy through burnt orange to bright copper. It is characterized by high levels of the reddish pigment pheomelanin and relatively low levels of the dark pigment eumelanin. The term redhead has been in use since at least 1510. It is associated with fair skin color, lighter eye colors, freckles, and sensitivity to ultraviolet light.Cultural reactions have varied from ridicule to admiration; many common stereotypes exist regarding redheads and they are often portrayed as fiery-tempered   more
1 vote
0 comments
Red hair - Voter Comments
No Comments
Vote & Comment
5

Auburn hair is a variety of red hair, most commonly described as reddish-brown in color. Auburn hair ranges in shades from medium to dark. Like brown hair, it is common with a wide array of skin-tones and eye-colors, but as is the case with most red...  hair, it is commonly associated with light skin features. The chemical pigments that cause the coloration of auburn hair are frequently pheomelanin with high levels of eumelanin   more
0 votes
0 comments
Auburn hair - Voter Comments
No Comments
Vote & Comment
Leave a comment...
(Maximum 900 words)