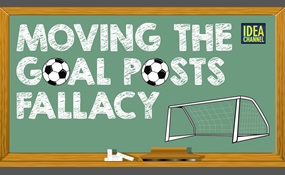 When informally debating, do you mind when your opponent moves their goalpost?

Moving the goalposts is an informal fallacy in which evidence presented in response to a specific claim is dismissed and some other (often greater) evidence is demanded. That is, after an attempt has been made to score a goal, the goalposts are moved to exclude the attempt. The problem with changing the rules of the game is that the meaning of the end result is changed, too.

Yes, I do mind. It's annoying.

4 votes
2 comments
Yes, I do mind. It's annoying. - Voter Comments

No, I don't mind. I find it intellectually stimulating.

2 votes
1 comment
No, I don't mind. I find it intellectually stimulating. - Voter Comments

Leaning says2018-07-14T15:16:57.4749226Z
Report Post
Leaves me free to move my own goal post as well. Or to cheerfully and gleefully call them out on moving the goalpost and citing it as an obvious reason as why the voters should vote for me.
Vote & Comment
3

I don't notice most of the time.