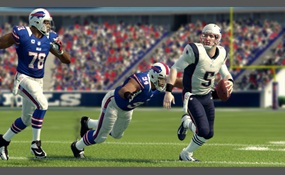 John Albert Elway, Jr. Is a former American football quarterback and current General Manager and Executive Vice President of Football Operations for the Denver Broncos of the National Football League. He played college football at Stanford and his e... ntire professional career with the Denver Broncos. Elway recorded the most victories by a starting quarterback at the time of his retirement. He retired in 1999 and statistically was the second most prolific passer in NFL history. Elway led his teams to six AFC Championship Games and five Super Bowls, winning his last two.Elway set several career records for passing attempts and completions while at Stanford. He also received All-American honors. Elway was drafted #1 overall in the 1983 NFL Draft by the Baltimore Colts before being traded to the Denver Broncos. In 1987, he embarked on what is considered to be one of the most clutch and iconic performances in sports and in NFL history, helping engineer the Broncos on a 98-yard, game-tying touchdown drive in the AFC Championship Game against the Cleveland Browns. The moment is known in National Football League lore as "The Drive"   more
1 vote
0 comments
John Elway - Voter Comments
No Comments
Vote & Comment
2

Jerry Lee Rice is a retired American football wide receiver who played 20 seasons in the National Football League. He is widely considered to be the greatest wide receiver in NFL history and among the greatest NFL players overall. On November 4, 201... 0, Rice was chosen by NFL Network's NFL Films production The Top 100: NFL's Greatest Players as the greatest player in NFL history.He is the all-time leader in most major statistical categories for wide receivers and the all-time NFL leader in receptions, touchdown receptions, and yards. Rice was selected to the Pro Bowl 13 times and named All-Pro 12 times in his 20 NFL seasons. He won three Super Bowl rings playing for the San Francisco 49ers and an AFC Championship with the Oakland Raiders   more
1 vote
0 comments
Jerry Rice - Voter Comments
No Comments
Vote & Comment
3

Peyton Williams Manning is an American football quarterback for the Denver Broncos of the National Football League. A five-time league MVP, he played for the Indianapolis Colts for 14 seasons from 1998 to 2011. He is a son of former NFL quarterback ... Archie Manning and an elder brother of New York Giants quarterback Eli Manning.Manning played college football for the University of Tennessee, leading the Volunteers to the 1997 SEC Championship in his senior season. However, No. 3 Tennessee lost to the No. 2 Nebraska Cornhuskers 42-17 in the Orange Bowl giving Nebraska and Tom Osborne their 3rd national championship in 4 years. He was chosen by the Indianapolis Colts with the first overall pick in the 1998 NFL Draft. Manning's playing career and statistics have ranked him among the greatest quarterbacks of all-time. From 1998 to 2010, he led the Colts to eight division championships, two AFC championships, and one Super Bowl championship   more
1 vote
0 comments
Peyton Manning - Voter Comments
No Comments
Vote & Comment
4

Brett Lorenzo Favre is a former American football quarterback who spent the majority of his career with the Green Bay Packers of the National Football League. He was a 20-year veteran of the NFL, having played quarterback for the Atlanta Falcons, Gr... een Bay Packers, New York Jets, and Minnesota Vikings. Favre is the only quarterback in NFL history to throw for over 70,000 yards, over 500 touchdowns, over 300 interceptions, over 6,000 completions, and over 10,000 pass attempts.Favre started at the quarterback position for the University of Southern Mississippi for four years before being selected in the second round of the 1991 NFL Draft by Atlanta. He was traded to Green Bay on February 10, 1992, for the 19th pick in the 1992 NFL Draft.Favre became the Packers' starting quarterback in the fourth game of the 1992 season, stepping in for injured quarterback Don Majkowski, and started every game through the 2007 season. He was traded to the New York Jets and started at quarterback for the 2008 season before signing with the Vikings on August 18, 2009 as their starting quarterback. He made an NFL record 297 consecutive starts   more
0 votes
0 comments
Brett Favre - Voter Comments
No Comments
Vote & Comment
6

Daniel Constantine "Dan" Marino, Jr. Is a former American football quarterback who played for the Miami Dolphins of the National Football League. The last quarterback of the Quarterback Class of 1983 to be taken in the first round, Marino held or cu... rrently holds dozens of NFL records associated with the quarterback position. Despite never being on a Super Bowl-winning team, he is recognized as one of the greatest quarterbacks in American football history. Best remembered for his quick release and powerful arm, Marino led the Dolphins to the playoffs ten times in his seventeen-season career. He was inducted into the Hall of Fame in 2005.He led the Miami Dolphins to an AFC championship in the 1984 season, only his second season in the NFL. During that year, he threw a then-NFL record 48 touchdown passes. Despite the 14–2 season and Marino's touchdown record, the Dolphins lost Super Bowl XIX 38–16 to the 15–1 San Francisco 49ers   more
0 votes
0 comments
Dan Marino - Voter Comments
No Comments
Vote & Comment
7

Deion Luwynn Sanders, Sr. Is an American and former football and baseball player, who works as an NFL Network analyst. He was inducted to the Pro Football Hall of Fame on August 6, 2011.Sanders played football primarily at cornerback, but also as a ... kick returner, punt returner and occasionally as a running back or wide receiver. He played in the NFL for the Atlanta Falcons, the San Francisco 49ers, the Dallas Cowboys, the Washington Redskins and the Baltimore Ravens, winning the Super Bowl with both the 49ers and the Cowboys. An outfielder in baseball, he played professionally for the New York Yankees, the Atlanta Braves, the Cincinnati Reds and the San Francisco Giants, and participated in the 1992 World Series with the Braves. He attended Florida State University, where he was recognized as a two-time All-American in football, and also played baseball and track.During the 1989 season, he hit a major league home run and scored a touchdown in the NFL in the same week, the only player ever to do so. Sanders is also the only man to play in both a Super Bowl and a World Series.Sanders founded the Prime Prep Academy charter school in 2012 and has coached at the school   more
0 votes
0 comments
Deion Sanders - Voter Comments
No Comments
Vote & Comment
No comments yet.
Leave a comment...
(Maximum 900 words)
Privacy Policy | Terms of Use
Sitemap | View Desktop Version
©2021 Debate.org. All rights reserved.