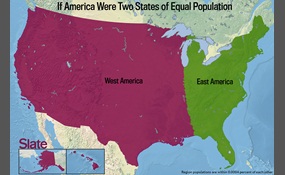 Which state would you like to see kicked out of the United States?

California is a state located on the West Coast of the United States. It is the most populous U.S. state, home to one out of eight people who live in the U.S., with a total of 38 million people, and it is the third largest state by area. California ... is bordered by Oregon to the north, Nevada to the east, Arizona to the southeast, and the Mexican state of Baja California to the south. It is home to the nation's second and fifth most populous census statistical areas, and eight of the nation's 50 most populated cities. Sacramento is the state capital.What is now California was first settled by various Native American tribes before being explored by a number of European expeditions throughout the 16th and 17th centuries. It was then claimed by the Spanish Empire as part of Alta California in the larger territory of New Spain. Alta California became a part of Mexico in 1821 following its successful war for independence, but would later be ceded to the United States in 1848 after the Mexican-American War. The western portion of Alta California was soon organized as the State of California, which was admitted as the 31st state on September 9, 1850   more
14 votes
4 comments
California - Voter Comments

themightyindividual says2014-11-10T16:56:16.4261422-06:00
Report Post
Those commies want to destroy our country. But first they want to suck their own money supply dry just like they did their water supply. California kept on pouring clean water into swamps for no reason until it all left. Now they rely on federal water.

New York is a state in the Northeastern and Mid-Atlantic regions of the United States. New York is the 27th-most extensive, the third-most populous, and the seventh-most densely populated of the 50 United States. New York is bordered by New Jersey a... nd Pennsylvania to the south and by Connecticut, Massachusetts, and Vermont to the east. The state has a maritime border with Rhode Island east of Long Island, as well as an international border with the Canadian provinces of Quebec to the north and Ontario to the west and north. The state of New York is often referred to as New York State to distinguish it from New York City, its largest city.New York City, with a Census-estimated population of over 8.4 million in 2013, is the most populous city in the United States and the nucleus of the premier gateway for legal immigration to the United States—the New York City Metropolitan Area, one of the most populous urban agglomerations in the world. New York City is also known for being the location of Ellis Island, the largest historical gateway for immigration in the history of the United States   more
2 votes
0 comments
New York - Voter Comments
No Comments
Vote & Comment
3

Texas is the second most populous and the second largest of the 50 U.S. states in the United States of America, and the largest state in the 48 contiguous United States. Geographically located in the south central part of the country, Texas shares a... n international border with the Mexican states of Chihuahua, Coahuila, Nuevo León, and Tamaulipas to the south and borders the U.S. states of New Mexico to the west, Oklahoma to the north, Arkansas to the northeast, and Louisiana to the east. Texas has an area of 268,820 square miles and a growing population of over 26.4 million residents.Houston is the largest city in Texas and the fourth-largest in the United States, while San Antonio is the second largest in the state and seventh largest in the United States. Dallas–Fort Worth and Greater Houston are the fourth and fifth largest United States metropolitan areas, respectively. Other major cities include El Paso and Austin—the state capital. Texas is nicknamed the Lone Star State to signify Texas as a former independent republic and as a reminder of the state's struggle for independence from Mexico   more
1 vote
0 comments
Texas - Voter Comments
No Comments
Vote & Comment
5

Montana is a state in the Western United States. The state's name is derived from the Spanish word montaña. Montana has several nicknames, although none official, including "Big Sky Country" and "The Treasure State", and slogans that include "Land o... f the Shining Mountains" and more recently "The Last Best Place". Montana is ranked 4th in size, but 44th in population and 48th in population density of the 50 United States. The western third of Montana contains numerous mountain ranges. Smaller island ranges are found throughout the state. In total, 77 named ranges are part of the Rocky Mountains.The economy is primarily based on agriculture, including ranching and cereal grain farming. Other significant economic activities include oil, gas, coal and hard rock mining, lumber, and the fastest-growing sector, tourism. The health care, service, and government sectors also are significant to the state's economy. Millions of tourists annually visit Glacier National Park, the Little Bighorn Battlefield National Monument, and Yellowstone National Park   more
1 vote
1 comment
Montana - Voter Comments

Canada is a country in North America consisting of ten provinces and three territories. Located in the northern part of the continent, it extends from the Atlantic to the Pacific and northward into the Arctic Ocean. At 9.98 million square kilometres...  in total, Canada is the world's second-largest country by total area and the fourth-largest country by land area. Its common border with the United States is the world's longest land border shared by the same two countries.The land that is now Canada has been inhabited for millennia by various Aboriginal peoples. Beginning in the late 15th century, British and French colonies were established on the region's Atlantic coast. As a consequence of various conflicts, the United Kingdom gained and lost North American territories until left, in the late 18th century, with what mostly comprises Canada today. Pursuant to the British North America Act, on July 1, 1867 three colonies joined to form the autonomous federal dominion of Canada. This began an accretion of provinces and territories to the new self-governing dominion. In 1931, Britain granted Canada full independence in most matters with the Statute of Westminster 1931   more
1 vote
0 comments
Canada - Voter Comments
No Comments
Vote & Comment
8

The state with the worst jim crow laws

Ohio is a state in the Midwestern United States. Ohio is the 34th largest, the 7th most populous, and the 10th most densely populated of the 50 United States. The state's capital and largest city is Columbus.The name "Ohio" originated from Iroquois ... word ohi-yo’, meaning "great river" or "large creek". The state, originally partitioned from the Northwest Territory, was admitted to the Union as the 17th state on March 1, 1803. Although there are conflicting narratives regarding the origin of the nickname, Ohio is historically known as the "Buckeye State" and Ohioans are also known as "Buckeyes".The government of Ohio is composed of the executive branch, led by the Governor; the legislative branch, which comprises the Ohio General Assembly; and the judicial branch, which is led by the Supreme Court. Currently, Ohio occupies 16 seats in the United States House of Representatives. Ohio is known for its status as both a swing state and a bellwether in national elections   more
0 votes
0 comments
Ohio - Voter Comments
No Comments
Vote & Comment
11