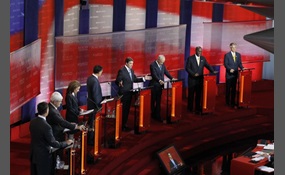 I'll do a poll for the late debate later.

Carly Fiorina is an American former business executive and was the Republican nominee for the United States Senate from California in 2010. Fiorina served as chief executive officer of Hewlett-Packard from 1999 to 2005 and previously was an executiv... e at AT&T and its equipment and technology spinoff, Lucent.Fiorina was considered one of the most powerful women in business during her tenure at Lucent and Hewlett-Packard. While she was chief executive at HP, the company weathered the collapse of the dot-com bubble, although the stock lost half of its value throughout her tenure. In 2002, the company completed a contentious merger with rival computer company Compaq, which made HP the world's largest personal computer manufacturer. In 2005, Fiorina was forced to resign as chief executive officer and chairman of HP following "differences [with the board of directors] about how to execute HP's strategy."Fiorina served as an advisor to Republican John McCain's 2008 presidential campaign. She was the Republican nominee for the United States Senate from California in 2010, losing to incumbent Democratic Senator Barbara Boxer. She is actively considering running for President in 2016   more
6 votes
2 comments
Carly Fiorina - Voter Comments

imabench says2015-08-07T00:44:07.1500557Z
Report Post
If you look at which candidate generated the most search requests on google, Fiorina was the clear winner with Graham a close second, and Santorum doing the absolute worst....
Vote & Comment
2

Piyush "Bobby" Jindal is an American politician who is the 55th and current Governor of Louisiana and the Vice Chairman of the Republican Governors Association.Jindal was born in Baton Rouge, Louisiana, to immigrants from India. Prior to entering po... litics, Jindal studied for a Bachelor of Science in biology and public policy at Brown University from 1988 to 1991 and then a Master of Letters in political science from New College, Oxford, as a Rhodes Scholar. He worked for McKinsey & Company and interned for Representative Jim McCrery of Louisiana. In 1996, Governor Murphy Foster appointed Jindal Secretary of the Louisiana Department of Health and Hospitals, and in 1999 he was appointed President of the University of Louisiana System. In 2001, Jindal was appointed as the principal adviser to Tommy Thompson, the United States Secretary of Health and Human Services by President George W. Bush.He first ran for governor in 2003 and won a plurality in the nonpartisan blanket primary but lost in the general election to Democrat Kathleen Blanco. He then won a seat in the United States House of Representatives in the 2004 elections   more
2 votes
0 comments
Bobby Jindal - Voter Comments
No Comments
Vote & Comment
3

Richard John "Rick" Santorum is an American attorney and Republican Party politician. He served as a United States Senator representing Pennsylvania and was the Senate's third-ranking Republican. He ran as a candidate for the 2012 Republican Party p... residential nomination, finishing second to the eventual Republican nominee Mitt Romney.Born in Virginia, Santorum was raised primarily in Butler, Pennsylvania. He obtained an undergraduate degree from Pennsylvania State University, an M.B.A. From the University of Pittsburgh, and a J.D. From the Dickinson School of Law. Santorum worked as an attorney at Kirkpatrick & Lockhart, where he met Karen Garver. They married in 1990, and have seven living children. Santorum was elected to the U.S. House of Representatives to represent Pennsylvania's 18th congressional district in 1990 and later became a member of a group dubbed the "Gang of Seven".Santorum was elected as a United States Senator for Pennsylvania in 1994. He served two terms until losing his re-election bid in 2006. A devout, practicing Catholic, Santorum is a social conservative who opposes same-sex marriage and artificial birth control   more
1 vote
1 comment
Rick Santorum - Voter Comments

NewLifeChristian says2015-08-07T01:39:13.4197460Z
Report Post
Santorum spoke very well during the debate and answered the questions given to him with much thought.
Vote & Comment
4

James Stuart "Jim" Gilmore III is an American politician who was the 68th Governor of Virginia from 1998 to 2002. He is a member of the Republican Party.A native Virginian, Gilmore received a Bachelor's of Arts and a Juris Doctor from the University...  of Virginia, and then served in the U.S. Army as a counterintelligence agent. He later was elected to public office as a county prosecutor, as the Attorney General of Virginia, and as Governor of Virginia   more
0 votes
0 comments
Jim Gilmore - Voter Comments
No Comments
Vote & Comment
7

James Richard "Rick" Perry (born March 4, 1950) is the 47th and current Governor of Texas. A Republican, Perry was elected Lieutenant Governor of Texas in 1998 and assumed the governorship in December 2000 when then-governor George W. Bush resigned ... to become President of the United States. Perry was elected to full gubernatorial terms in 2002, 2006 and 2010. With a tenure in office to date of 10 years, 289 days, Perry is the longest continuously serving current U.S. governor, and the second longest serving current U.S. governor after Terry Branstad of Iowa.Perry served as Chairman of the Republican Governors Association in 2008 (succeeding Sonny Perdue of Georgia) and again in 2011. Perry is the longest serving governor in Texas state history. As a result, he is the only governor in modern Texas history to have appointed at least one person to every eligible state office, board, or commission position (as well as to several elected offices to which the governor can appoint someone to fill an unexpired term, such as six of the nine current members of the Texas Supreme Court).Perry won the Texas 2010 Republican gubernatorial primary election, defeating U.S. Senator Kay Bailey Hutchison and former Wharton County Republican Party Chairwoman and businesswoman Debra Medina. In the 2010 Texas gubernatorial election, Perry won a third term by defeating former Houston mayor Bill White and Kathie Glass. On August 13, 2011, Perry announced in South Carolina that he was running for the Republican nomination for President of the United States in the 2012 presidential election. Political observers and public opinion polls place him as a front-runner in the race   more
0 votes
0 comments
Rick Perry - Voter Comments
No Comments
Vote & Comment
Leave a comment...
(Maximum 900 words)

Texas14 says2015-08-07T00:24:05.4587526Z
Report Post
By historical standards, I am a true conservative. I believe in personal freedom, balancing the budget, cutting spending. It's neo-conservatives who aren't the real conservatives. Senator Robert Taft (aka Mr. Republican) didn't even want to be in NATO.

imabench says2015-08-07T00:41:51.3199850Z
Report Post
As for the poll I don't really think anyone 'won'. Its kinda hard to figure out who did the best when there literally isnt even an audience to cheer/applaud candidates after their remarks... Im also disappointed that the candidates weren't allowed to respond to each other or challenge their stances. The whole thing seemed like more of a CSPAN Q+A session than any sort of debate
Privacy Policy | Terms of Use
Sitemap | View Desktop Version
©2021 Debate.org. All rights reserved.