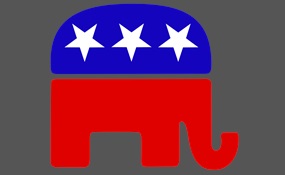 Who would you vote for (For Republicans)

Donald John Trump, Sr. Is an American businessman, investor, television personality and author. He is the chairman and president of The Trump Organization and the founder of Trump Entertainment Resorts. Trump's extravagant lifestyle, outspoken manne... r, and role on the NBC reality show The Apprentice have made him a well-known celebrity who was No. 17 on the 2011 Forbes Celebrity 100 list.Considered one of the best known real estate entrepreneurs in the United States, Trump is the son of Fred Trump, a wealthy New York City real-estate developer. He worked for his father's firm, Elizabeth Trump & Son, while attending the Wharton School of the University of Pennsylvania, and in 1968 officially joined the company. He was given control of the company in 1971 and renamed it The Trump Organization. After his third bankruptcy in 2009, the property of Trump Entertainment Resorts was sold to various buyers.In 2010, Trump expressed an interest in becoming a candidate for President of the United States in the 2012 election, though in May 2011, he announced he would not be a candidate. Trump was a featured speaker at the 2013 Conservative Political Action Conference   more
5 votes
1 comment
Donald Trump - Voter Comments

Benjamin S. Carson, Sr., M.D. Has been a director of the Company since May 1999. He is the Director of Pediatric Neurosurgery at Johns Hopkins University. Dr. Carson is also a director of Kellogg Company.
3 votes
1 comment
Ben Carson - Voter Comments

Rafael Edward "Ted" Cruz is the junior United States Senator from Texas. Elected in 2012, he is the first Cuban American or Latino to hold the office of US Senator from Texas. Cruz is a member of the Republican Party. He served as Solicitor General ... of Texas from 2003 to May 2008, after being appointed by Texas Attorney General Greg Abbott. Between 1999 and 2003, Cruz served as the director of the Office of Policy Planning at the Federal Trade Commission, an Associate Deputy Attorney General at the United States Department of Justice, and as Domestic Policy Advisor to U.S. President George W. Bush on the 2000 Bush-Cheney campaign. Cruz was also an Adjunct Professor of Law at the University of Texas School of Law in Austin, where he taught U.S. Supreme Court litigation, from 2004 to 2009.Cruz was the Republican nominee for the Senate seat vacated by fellow Republican Kay Bailey Hutchison. On July 31, 2012, he defeated Lieutenant Governor David Dewhurst in the Republican primary runoff, 57–43. Cruz defeated the Democrat, former state Representative Paul Sadler, in the general election held on November 6, 2012; he prevailed with 56–41 over Sadler   more
3 votes
1 comment
Ted Cruz - Voter Comments

John Richard Kasich is the 69th Governor of Ohio, in office since 2011. A member of the Republican Party, he previously served as a member of the United States House of Representatives, representing Ohio's 12th congressional district from 1983 to 20... 01. He was a commentator on Fox News Channel, hosting Heartland with John Kasich; he also worked as an investment banker, as managing director of Lehman Brothers's Columbus, Ohio office until the firm collapsed in 2008.In the 2010 Ohio gubernatorial election, Kasich defeated Democratic incumbent Ted Strickland, 49% to 47%. He won re-election in 2014, defeating Democrat Ed FitzGerald, the County Executive of Cuyahoga County, 64% to 33%   more
3 votes
1 comment
John Kasich - Voter Comments

Christopher James "Chris" Christie is the 55th Governor of New Jersey and a leading member of the Republican Party.Born in Newark, Christie became interested in politics at an early age, and volunteered for the gubernatorial campaign of Republican T... om Kean in 1977. A 1984 graduate of the University of Delaware, he earned a J.D. At Seton Hall University School of Law. Christie joined a Cranford law firm in 1987, where he became a partner in 1993, and continued practicing until 2002. He was elected as a county legislator in Morris County, serving from 1995 to 1998, during which time he generally pushed for lower taxes and lower spending. By 2002, Christie had campaigned for Presidents George H.W. Bush and George W. Bush; the latter appointed him as United States Attorney for New Jersey, a position he held from 2002 to 2008. In that position, he emphasized prosecutions of political corruption, and also obtained convictions for sexual slavery, arms trafficking, racketeering by gangs, as well as other federal crimes.In January 2009, Christie declared his candidacy for Governor of New Jersey   more
1 vote
1 comment
Chris Christie - Voter Comments

Marco Antonio Rubio is the junior United States Senator from Florida, serving since January 2011. A member of the Republican Party, he previously served as Speaker of the Florida House of Representatives.A Cuban American native of Miami, Florida, Ru... bio is a graduate of the University of Florida and the University of Miami Law School. In the late 1990s, he served as a City Commissioner for West Miami and was elected to the Florida House of Representatives in 2000, representing the 111th House district. He was elected Speaker in November 2006.Rubio announced a run for U.S. Senate in May 2009 after incumbent Republican Mel Martinez resigned. Initially trailing by double-digits against the incumbent Republican Governor Charlie Crist, Rubio eventually surpassed him in polling for the Republican nomination. Rubio won the Republican nomination after Crist opted instead to run with no party affiliation. In a three-way split against Crist and Democratic candidate Kendrick Meek, Rubio won the general election in November 2010 with 48.9 percent of the vote. He is one of three Latinos in the Senate   more
1 vote
0 comments
Marco Rubio - Voter Comments
No Comments
Vote & Comment
8
VOTING CLOSED

John Ellis "Jeb" Bush served as the 43rd Governor of Florida from 1999 to 2007. He is the second son of former President George H. W. Bush and former First Lady Barbara Bush, and is the younger brother of former President George W. Bush. Jeb Bush is...  the only Republican to serve two full four-year terms as Governor of Florida.Bush grew up in Houston, Texas. He attended the University of Texas, where he earned a degree in Latin American affairs. Following his father's successful run for Vice President in 1980, he moved to Florida. In 1986, Bush was named Florida's Secretary of Commerce, a position he held until resigning in 1988 to help his father's successful campaign for the Presidency.In 1994, Bush made his first run for office, narrowly losing the election for governor by less than two percentage points to the incumbent Lawton Chiles. Bush ran again in 1998 and beat Lieutenant Governor Buddy MacKay with 55 percent of the vote. He ran for reelection in 2002, and won with 56 percent, to become Florida's first two-term Republican Governor   more
0 votes
0 comments
Jeb Bush - Voter Comments
No Comments
Vote & Comment
9
VOTING CLOSED

Carly Fiorina is an American former business executive and was the Republican nominee for the United States Senate from California in 2010. Fiorina served as chief executive officer of Hewlett-Packard from 1999 to 2005 and previously was an executiv... e at AT&T and its equipment and technology spinoff, Lucent.Fiorina was considered one of the most powerful women in business during her tenure at Lucent and Hewlett-Packard. While she was chief executive at HP, the company weathered the collapse of the dot-com bubble, although the stock lost half of its value throughout her tenure. In 2002, the company completed a contentious merger with rival computer company Compaq, which made HP the world's largest personal computer manufacturer. In 2005, Fiorina was forced to resign as chief executive officer and chairman of HP following "differences [with the board of directors] about how to execute HP's strategy."Fiorina served as an advisor to Republican John McCain's 2008 presidential campaign. She was the Republican nominee for the United States Senate from California in 2010, losing to incumbent Democratic Senator Barbara Boxer. She is actively considering running for President in 2016   more
0 votes
0 comments
Carly Fiorina - Voter Comments
No Comments
Vote & Comment
10
VOTING CLOSED

Piyush "Bobby" Jindal is an American politician who is the 55th and current Governor of Louisiana and the Vice Chairman of the Republican Governors Association.Jindal was born in Baton Rouge, Louisiana, to immigrants from India. Prior to entering po... litics, Jindal studied for a Bachelor of Science in biology and public policy at Brown University from 1988 to 1991 and then a Master of Letters in political science from New College, Oxford, as a Rhodes Scholar. He worked for McKinsey & Company and interned for Representative Jim McCrery of Louisiana. In 1996, Governor Murphy Foster appointed Jindal Secretary of the Louisiana Department of Health and Hospitals, and in 1999 he was appointed President of the University of Louisiana System. In 2001, Jindal was appointed as the principal adviser to Tommy Thompson, the United States Secretary of Health and Human Services by President George W. Bush.He first ran for governor in 2003 and won a plurality in the nonpartisan blanket primary but lost in the general election to Democrat Kathleen Blanco. He then won a seat in the United States House of Representatives in the 2004 elections   more
0 votes
0 comments
Bobby Jindal - Voter Comments
No Comments
Vote & Comment
11
VOTING CLOSED

Richard John "Rick" Santorum is an American attorney and Republican Party politician. He served as a United States Senator representing Pennsylvania and was the Senate's third-ranking Republican. He ran as a candidate for the 2012 Republican Party p... residential nomination, finishing second to the eventual Republican nominee Mitt Romney.Born in Virginia, Santorum was raised primarily in Butler, Pennsylvania. He obtained an undergraduate degree from Pennsylvania State University, an M.B.A. From the University of Pittsburgh, and a J.D. From the Dickinson School of Law. Santorum worked as an attorney at Kirkpatrick & Lockhart, where he met Karen Garver. They married in 1990, and have seven living children. Santorum was elected to the U.S. House of Representatives to represent Pennsylvania's 18th congressional district in 1990 and later became a member of a group dubbed the "Gang of Seven".Santorum was elected as a United States Senator for Pennsylvania in 1994. He served two terms until losing his re-election bid in 2006. A devout, practicing Catholic, Santorum is a social conservative who opposes same-sex marriage and artificial birth control   more
0 votes
0 comments
Rick Santorum - Voter Comments
No Comments
Vote & Comment
12
VOTING CLOSED

James Stuart "Jim" Gilmore III is an American politician who was the 68th Governor of Virginia from 1998 to 2002. He is a member of the Republican Party.A native Virginian, Gilmore received a Bachelor's of Arts and a Juris Doctor from the University...  of Virginia, and then served in the U.S. Army as a counterintelligence agent. He later was elected to public office as a county prosecutor, as the Attorney General of Virginia, and as Governor of Virginia   more
0 votes
0 comments
Jim Gilmore - Voter Comments
No Comments
Vote & Comment
14
VOTING CLOSED