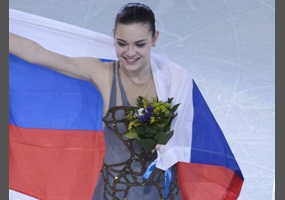 Russia stuns with Olympic gold in women's figure skating. Do you think they cheated?