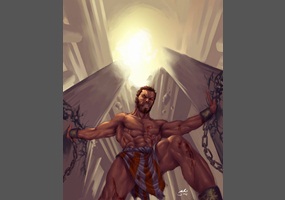 Samson (yes) vs. Hercules (no): Who would win in a fight?

Asked by: CelestialKnight
Zeus, Samson, Hercules, Kellan Lutz
Samson (yes) vs. Hercules (no): Who would win in a fight?
48% Say Yes
52% Say No
Leave a comment...
(Maximum 900 words)
whatledge says2013-12-23T23:59:38.533
Report Post
If both were to be compared in the context that they exist, then naturally, both Zeus and YHWH must also exist. In that context, I would have to say that YHWH is more overpowered than Zeus, given the omnipotent characteristic along with omniscience. Zeus has been outsmarted by mortals before, so whoever has the support of YHWH would win, should YHWH choose to intervene.
GWL-CPA says2013-12-24T01:06:43.993
Report Post
Why do children-like adults get to post nonsense questions like this?
00r3d says2013-12-24T01:21:45.577
Report Post
What would happen if an unstoppable force met an immovable object... Same principle.
GWL-CPA says2013-12-24T01:25:01.107
Report Post
Silly nonsense for children
theta_pinch says2013-12-24T15:25:49.037
Report Post
Christianguy55 about your comment about Samson being real and Heracles being fake; both were based on real incredible warriors of their time. Archaeologists have found evidence to suggest there was really a great warrior called Heracles. Also you have no evidence that Samson really did have as much strength as you say. The only evidence you have is a story told for thousands of years and eventually written down. Your only source is about as reliable as the Heracles epic.
GWL-CPA says2013-12-24T18:13:26.470
Report Post
Theta_pinch, you need to get a grip with reality. Hercules was a Greek god in Greek mythology. Samson and Delilah is a fairy tale in the Bible in the book of Judges - chapters 13 to 16. No archaeologist could possibly find any evidence that Heracles or Samson and Delilah actually ever existed. But, please do site your sources.
theta_pinch says2013-12-24T18:41:07.177
Report Post
I didn't say they actually existed as the legends portray them I said that the legends were BASED off of real warriors. My source for Heracles was the National Geographic documentary Clash of the Gods: Hercules. Which talks about the legend of Hercules and its relationship to reality. About Samson being based on a real warrior; I am not quite sure but it seems likely considering how many myths are BASED on real people.
GWL-CPA says2013-12-24T18:56:29.177
Report Post
Theta_pinch you stated:

"Archaeologists have found evidence to suggest there was really a great warrior called Heracles."

You cannot support that statement; it is solely your subjective opinion.

I think you misunderstood the National Geographic documentary.
theta_pinch says2013-12-24T19:29:20.617
Report Post
Great warrior meant a warrior who was really good at battle not a warrior who killed the Hydra or was semi-immortal. I didn't misunderstand what it meant. The National Geographic Documentary talked about archaeological evidence of a warrior near the place were Hercules was said to live. It didn't say that Epic Hercules Existed; nor did I. However I will admit my comment might have been a bit vague. I suggest find and watch the documentary.
GWL-CPA says2013-12-24T19:35:08.023
Report Post
No point to watch anything. This question is a stupid question, like many at this site.
Privacy Policy | Terms of Use
Sitemap | View Desktop Version
©2021 Debate.org. All rights reserved.