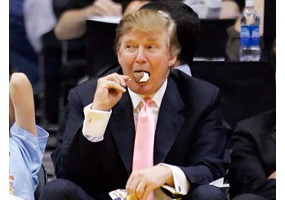 Should Donald trump stay as president?

Should Donald trump stay as president?
44% Say Yes
56% Say No
Load More Arguments
Leave a comment...
(Maximum 900 words)
ladiesman says2019-01-10T03:08:40.090
Report Post
In the most recent Trump incident, He walked out of a Situation Room meeting with Nancy Pelosi and Chuck Schumer after Nancy refused to fund his border wall in exchange for Trump ending the shutdown. After Nancy turned down his demand, He retorted with “We have nothing left to discuss” and left the room. Afterwards, He posted a tweet saying the meeting was a “waste of time”. If that’s not conduct unbecoming of the presidency, Then I don’t know what is. His temperament makes him an embarrassment to this country. For a man in his 70s, He behaves like a middle school bully.
ladiesman says2019-02-03T04:06:52.907
Report Post
Trump is now complaining he is making less money being president. He had to put several business deals on hold. If he wants to go back to making as much money as he used to, Then he should resign the presidency. He'd be doing this country, And the world a favor by leaving the White House.
Privacy Policy | Terms of Use
Sitemap | View Desktop Version
©2020 Debate.org. All rights reserved.