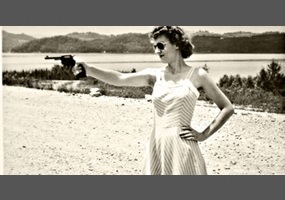 Should individuals have a right to bear arms?

United States
Should individuals have a right to bear arms?
71% Say Yes
29% Say No
Load More Arguments
Leave a comment...
(Maximum 900 words)
Anonymous says2013-03-22T16:10:51.430
Report Post
On why civilians need guns for self defense FROM government, why the government should not have a "monopoly on violence/force"

COPS and to a lesser extent soldiers are the primary killers of unarmed citizens in the last 100 years........ so letting them have guns while disarming everyone else will simply yield more of the same. There is a 7:1 ratio of citizens (not soldiers) killed by their OWN government than of people (citizens, soldiers, anyone) killed in ALL WARS COMBINED. Goverments kill people with guns, they are the cause of "gun death" and "gun crime", even if you utterly ignore wars, which they ALSO cause.

also see http://reason.com/archives/2006/10/20/deadly-disarmament
http://www.smallarmssurveysudan.org/fileadmin/docs/working-papers/HSBA-WP-11-Jonglei-violence.pdf
songmin1 says2014-01-18T04:52:56.047
Report Post
What's the purpose of a gun whether it's armed by a lunatic or a well trained professional? That's right, to kill someone or something. Sure, a scissor can kill or a baseball bat too but its purpose in life is for other uses not to take a soul.
ladiesman says2014-06-08T23:56:02.107
Report Post
I think the "right" to bear arms is out of the question. What matters is how you intend to use a gun if you possess one.
Zebdemption says2015-03-11T19:24:43.997
Report Post
Anyone else notice a direct link between the quality of argument and vote? The yes voters seem to have much poorer argumentative skills than the no voters
Privacy Policy | Terms of Use
Sitemap | View Desktop Version
©2021 Debate.org. All rights reserved.