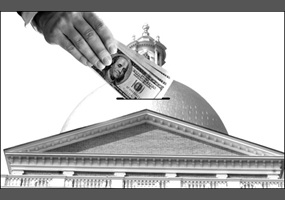 Should lobbying be banned from politics?

Canada, Purdue University, United States, Politics
Should lobbying be banned from politics?
87% Say Yes
13% Say No
Load More Arguments
Leave a comment...
(Maximum 900 words)
Cmceachran says2020-11-05T02:42:34.547
Report Post
Lobbying should not be banned. I think that lobbying helps with change. It brings issues to the legislature that they may not have known about. It helps the government know what changes may need to be made. It can be unfair though that companies and people who can afford someone to lobby for them have a better advantage then those who cannot afford it.
Privacy Policy | Terms of Use
Sitemap | View Desktop Version
©2022 Debate.org. All rights reserved.