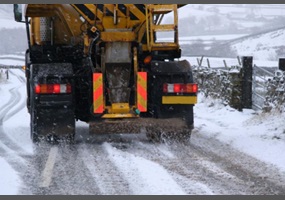 Should local governments stop using salt on snowy roads in order to protect the natural environment?