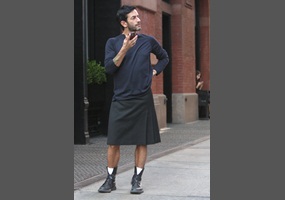 Asked by: angrybird
Clothing, Men, Shopping
Should men wear skirts?
95% Say Yes
5% Say No
Load More Arguments
Leave a comment...
(Maximum 900 words)
delabole says2016-06-05T19:11:10.337
Report Post
Men who aren't afraid to wear what they like, are confident of their sexuality. I have never been drawn to other men, but I feel comfortable wearing a skirt and frilly undies - what is wrong with attractive clothing?
Alsamont says2016-07-15T15:54:26.087
Report Post
The question should be "Why shouldn't a man wear a kilt?" In this 16th year of the 21st Century--with the fall of so many stuffy attitudes and conformities (especially among the Millennials)--why should it possibly matter if a man wears a kilt--at play, work, special occasions, or just knocking about the house and yard.
Privacy Policy | Terms of Use
Sitemap | View Desktop Version
©2022 Debate.org. All rights reserved.