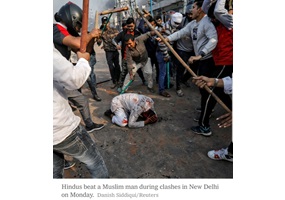 Should MIDDLE EAST leaders ban WORK VISAS for INDIAN HINDUS to save MUSLIMS in INDIA?

Asked by: NoHindusinGCC
Muslim leaders must do more to stop these shameless Indian Hindus making living in Middle East., Despite being the country's largest religious-minority, India's Muslim communities have been frequently subjected to violent attacks and assault by right-wing Hindu nationalists. Enough is enough
Should MIDDLE EAST leaders ban WORK VISAS for INDIAN HINDUS to save MUSLIMS in INDIA?
33% Say Yes
67% Say No
Leave a comment...
(Maximum 900 words)
No comments yet.
Privacy Policy | Terms of Use
Sitemap | View Desktop Version
©2021 Debate.org. All rights reserved.