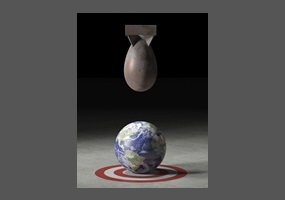 Should nuclear weapons be abolished?

United States, North Korea
Should nuclear weapons be abolished?
50% Say Yes
50% Say No
Load More Arguments
Leave a comment...
(Maximum 900 words)
Anonymous says2013-04-16T16:40:21.870
Report Post
If we all could agree to abolish nuclear warheads and other weapons of mass destruction the world we live in would drastically change over night. The human race will no longer be afrade of when the next war when a country threatens to nuke out country. We allonly have one planet to live on unfortunatly and we have a duty to care and look after it rather than neglect. There are too many issues in the world to worry about one more thing.
alexys.hawkins says2014-05-19T21:12:32.560
Report Post
We all need to stop thinking about ourselves as countries,because we are not were from the planet earth a whole!! Yes we will have disagreements but we have to work around them if we all abolish the existence of nuclear weapons there will be no fear of the next war. When using these weapons we are killing thousands yet also destroying the world that we live in here our home !
MayorLamor says2016-08-22T09:20:13.317
Report Post
I'm really scared by American strong reliance on nuclear weapons. The fact they were heady enough to blast the first nukes over Japanese densely populated cities still looks monstrous imo!
Now they are doing even more scaring, set to deploy nukes in post-communist states, sort of Romania and other.
I fear their next step may be nukes in Arctic zone or close to it. Why not? There was some American project to deploy nukes in Iceland which threatened to drop NATO then and they didn't do it, thanks Lord.
Privacy Policy | Terms of Use
Sitemap | View Desktop Version
©2021 Debate.org. All rights reserved.