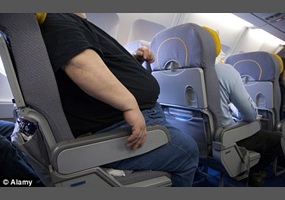 Airline
Should obese people pay for two airline seats?
84% Say Yes
16% Say No
Load More Arguments
Leave a comment...
(Maximum 900 words)
Anonymous says2013-02-14T19:22:33.127
Report Post
i agree with you guys fat people are second class citizens if they can not live an average american life
Quan says2013-06-24T19:16:04.207
Report Post
I like how the "No" side keeps acting like we're just charging them double out of spite. We aren't discriminating against you. You just take up two seats. No amount of whining and making excuses for your weight is going to change that fact. It is not fair that you are pushing paying customers out of adjacent seats, or even getting them kicked off the plane due to inadequate seating, just because you don't want to own the consequences of your own life choices.
Bruinshockeyfan says2013-08-16T00:57:16.867
Report Post
Instead of having them pay 2xs the price for two seats have them pay a large fee, not nearly as much as one seat, for two seats.
Contejour says2013-10-08T13:09:00.587
Report Post
Suck it up if your obese pay for two seats your denying someone else a seat who is not obese , and also these people can be very disruptive so let them pay .
Yeo says2014-02-03T16:41:29.530
Report Post
Seats need to be designed to suit all types of sizes. Some people actually have medical conditions that contribute to obeseness. To be fair, every person should pay the same amount of money each.
Privacy Policy | Terms of Use
Sitemap | View Desktop Version
©2020 Debate.org. All rights reserved.