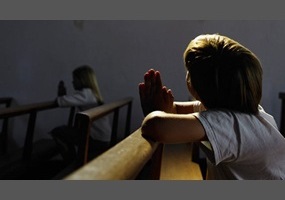 Should parents be able to make their children go to Church?

Family, Home
Should parents be able to make their children go to Church?
13% Say Yes
87% Say No
Load More Arguments
Leave a comment...
(Maximum 900 words)
Anonymous says2013-05-22T16:57:55.210
Report Post
Children wouldn't have to be made to go to church if Parents would follow the word of God in teaching their children God's word, then they would gladly go into the house of the Lord, as well as accept God at an early age & bring Him into their adult life. Children depend on their parents to "teach" them, not just let them do whatever they wish. Parents need to stop depending on Church, school or any other thing or person to teach their children. Parents by all means have the right to teach their children AND Yes, children & adults should go to Church, it's not a "bad thing", it's a "good thing". The Psalmist says, "I was glad when they said, let us go into the house of the Lord!!" Psalm 122:1 If only people would read the BIBLE, it answers all our questions if only we will seek we will find. The Church needs the Bible as much as the family. YES, parents should be able to take their children to Church.
Anonymous says2013-09-22T15:47:09.727
Report Post
I sometimes think that's the reason, why so many young people become atheists. I once knew of one guy my age that when he was younger, if he and his brother missed church, their mother made them watch Jimmy Swaggart :( ACH!!
Anonymous says2013-09-22T20:34:36.657
Report Post
So true, had I spent the time I gave to my child to ski and enjoy life, I would not be fighting this now. I wanted him to have what I did not. Since I had money and could buy him anything, I gave him what I never got. God had to show me that what he needed was the word deeply rooted in his every day life. I had to lose all I had to see that. Hank Jesus for His mercy and willingness to teach no matter how we are.
SarahCortez says2019-09-15T21:21:48.817
Report Post
If it was up to children, They would eat ice cream, Watch tv, Play video games, Use social media, And leave messes everywhere. Going to church on a regular basis fosters community and strengthens bonds(with face-to-face people from all ages and many walks of life) with a purpose of bettering ones' self through the establishment of a moral/value system and spiritual, Intellectual, Emotional self-reflection. It also provides important social supports to combat depression and suicide (which are now plaguing younger and younger people at alarming rates), Reduces smoking, Improves sleep (lack of, Is also plaguing younger and younger people), Improves relationships,   increases happiness, Hence improving quality of life and increasing lifespan. Also, With the daily busy-ness and constant noise, Finding a place of silence and tranquility are really what all people need as well. You cannot obtain that through soccer practice or watching movies, Going to the mall, And going to amusement parks. But you can meditate, Or do spiritual exercises at home, One can say, . . . Yeah, No parent I know does that. Plus, Not sure if any kid would like that either. Now, One could bring up the point that this is all fine and dandy, But how will all this church sink in for a child, Especially if church is only 1 hour a week and they don't fully comprehend all that is happening? My answer would be that church is really not for 1 hour a week, Church is for an entire lifetime. Like education and healthy living, It doesn't end at grade 8 or with the last piece of broccoli. Parents have to prepare and guide their children before and after. It's not a lot of work and the potential rewards are amazing. And this whole argument that organized religion is all bad because of some sexual predators in various organized religions, You might want to research how many of them are in education, Coaching, Scouts, Etc. In general, You don't see parents around the country trying en masse to prevent kids from going to school or playing a team sport because of teacher and/or coach abuse.
If the ultimate goal of organized religion is to make moral, Good people and to lead them to Heaven, Then an hour a week at church (it's one step to get there, Not the be all and end all of salvation), Which in essence doesn't cost you anything (with certain exceptions) and provides healthful benefits, In-person community interactions, Then it would be irresponsible not to make children go to church.
Privacy Policy | Terms of Use
Sitemap | View Desktop Version
©2020 Debate.org. All rights reserved.