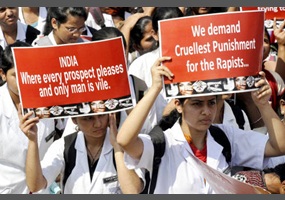 Should rapists be castrated?

Zimbabwe, Dehumanization, Robert Mugabe
Should rapists be castrated?
71% Say Yes
29% Say No
Load More Arguments
Leave a comment...
(Maximum 900 words)
jo154676 says2016-11-07T16:56:20.270
Report Post
This violates the 8th ammendment and a topic like this cannot have emotion brought into it. Yes rape is bad, yes they should get punished and yes they do ruin people's lives (to an extent) but to say that they should have their reproductive organs removed is stupid. I cannot believe that this is almost 2:1, clearly the constitution needs to be taught more in schools because if people think that doing something like this is moral or should be legal then we have failed them.
Privacy Policy | Terms of Use
Sitemap | View Desktop Version
©2022 Debate.org. All rights reserved.