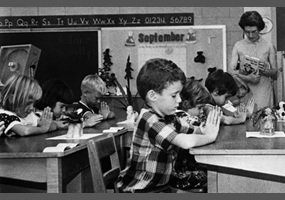 Should religion be taught in public schools?

United States, Religion, school
Should religion be taught in public schools?
50% Say Yes
50% Say No
Load More Arguments
Leave a comment...
(Maximum 900 words)
Sfaulkner says2014-07-02T06:00:26.073
Report Post
Children should be taught about the world religions just as they are taught about Greek, Roman, or Egyptian mythology. However, they should never be taught that one religion is right or wrong.
Privacy Policy | Terms of Use
Sitemap | View Desktop Version
©2020 Debate.org. All rights reserved.