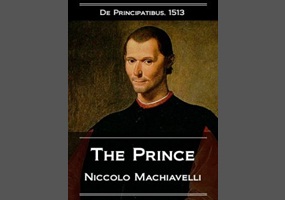 Should rulers today follow Niccolo Machiavelli's "The Prince?" Is it better for a ruler to be feared or loved?

Florence, Prince, Syria, Niccolò Machiavelli
Should rulers today follow Niccolo Machiavelli's "The Prince?" Is it better for a ruler to be feared or loved?
61% Say Yes
39% Say No
Load More Arguments
Leave a comment...
(Maximum 900 words)
lailadag says2016-11-27T17:21:25.187
Report Post
Would you rather be lead by a feared or loved leader? I think it would be better to be a bit of both, feared and loved. Being both feared and loved as a leader is important, however in some ways one is more important than the other.

Being feared is effective because people will listen to you and follow your rules, but you don’t want to be feared in every situation. There are times when a ruler should be loved by his followers, a time where they need to see the good in the leader in order to believe in them. A leader shouldn’t go so far as to be only loved and not feared however, because they won’t be respected or thought of as a strong ruler who can properly redirect or discipline his country as needed. Every leader should be kind enough to take power and lead, but be harsh enough to keep that power.

Being a harsh leader with no kindness at all can end very badly. A very good example to show us what this leader’s ending would be like is Adolf Hitler. Many researches and studies have proven that Hitler is never praised for the history he made, he is only judged and remembered for doing something that can not be forgiven. He was a heartless leader and what he did showed us that he was harsh and that only led to his ugly story being left behind with nothing good to be remembered.

The Prophet Muhammad - peace be upon him - is a perfect example to demonstrate how a leader should act towards his followers in everything. A leader is supposed to be a good role-model for the citizens in his nation and that was what the Prophet -pbuh- did. He treated people equally, and he was never unfair with his treatment towards anyone. This was evident in his home with his wives and daughters, he treated them all equally, brought joy to their hearts and never ever would he upset them. He was very modest and would speak to his people in a quite and understanding manner, as well as he would share their joys and their sorrows, despite god choosing him to deliver his message.

To sum up and conclude, I believe a leader who is feared, will only be obeyed because of this fear and the followers will feel forced to commit to the orders, while a citizens who follows their loved leader will do the job willingly and out of love. Therefore a leader with a caring, kind, yet a sharp personality would be best to rule.
Privacy Policy | Terms of Use
Sitemap | View Desktop Version
©2021 Debate.org. All rights reserved.