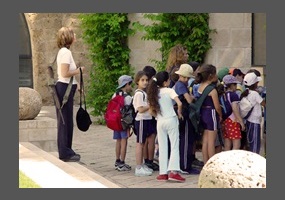 Should school teachers be armed with guns?

gun rights, school, teachers
Should school teachers be armed with guns?
52% Say Yes
48% Say No
Load More Arguments
Leave a comment...
(Maximum 900 words)
Anonymous says2013-03-21T15:26:42.430
Report Post
so what if one teacher gets mad at one student and shoots him
Anonymous says2013-03-26T14:24:40.490
Report Post
yes teachers should be allowed to carry guns because less kids will be killed and teachers will have a self defense weapon so the government should let teachers carry guns.
Anonymous says2013-03-27T19:44:24.007
Report Post
What if the student gets ahold of that gun and shoots someone
Anonymous says2013-03-27T20:23:52.017
Report Post
To answer the comments above: most likely they would be concealed carrying so it would be hard to tell if that particular teacher has a firearm. Thousands if not millions of law abiding people carry everyday and people do not normally shoot eachother. Most murder is caused by either trailer trash or drug related. Hopefully that kind if person is not a teacher.
Anonymous says2013-04-10T19:20:29.517
Report Post
No to guns for teachers!!!!!!!!
Anonymous says2013-04-16T15:50:59.833
Report Post
I do not think teachers should be armed because, well, I have a lot of ideas and it would take to long to wright and I do not have a lot of time.
Anonymous says2013-04-23T17:44:23.373
Report Post
We should have guns. Yes.
Anonymous says2013-05-11T02:20:59.277
Report Post
Schools should not be a gun free zone. I train with a gun a couple times a month. Since I am a law abiding citizen,I will not carry on school grounds.If I went insane tomorrow why not do whatever I want to.Legal or not.Believe it or not people who are legal to carry guns do everything to avoid conflict.They are trained,usually enjoy target practice,and believe it to be their right to protect themselves against criminals.If an untrained person with a gun saw the shooter enter,closed their eyes,pointed and pulled the trigger at the killer,how many students would have died? Rid us of the gun free zone and I am sure retired people will volunteer to protect our children.How long is it going to take before people realize criminals don't care about the law,make all of them you can. If a mentally ill person is going to kill why not go where the pickens are easy.Notice you dont see a rise in police station shootings,Nra meeting shootings,Man went nuts at shooting range?,killing all the armed patrons? Wake up!
Anonymous says2013-05-21T19:09:52.730
Report Post
How do we not who's the killer?
GunSupporter2004 says2019-06-04T21:42:12.030
Report Post
What if a student or a third party tries an attempt on a school shooting and the teachers/employees have a fire arm and can prevent a shooting from happening?
Privacy Policy | Terms of Use
Sitemap | View Desktop Version
©2022 Debate.org. All rights reserved.