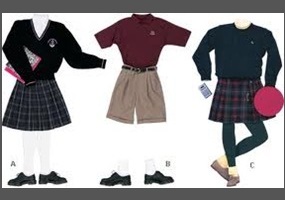 uniforms, school uniforms, school, Rihanna, dress code, Games
Should schools strictly enforce dress codes?
24% Say Yes
76% Say No
Load More Arguments
Leave a comment...
(Maximum 900 words)
Anonymous says2013-02-15T17:20:12.240
Report Post
Children gain confidence through dress codes.
Anonymous says2013-03-01T03:32:33.090
Report Post
Dress codes are dumb for school i think dress codes are for prep schools but Why dress codes
Anonymous says2013-03-11T22:06:00.347
Report Post
Dress codes should be enforced...to a limit, no body wants someones butt hanging out of there shorts so get longer shorts, Classy is wayyy more attractive than trashy!!! :)
Anonymous says2013-03-27T17:09:28.257
Report Post
Yes, but i don't think they should be as strict
Anonymous says2013-04-21T06:35:18.117
Report Post
I think a moderate dress code can be helpful; however dress code should not be reinforced during class time. I've seen so many cases when the student gets sent to the counseling office to be given change and they keep there for a long time until the counselor is finished with his/her personal issues (eating, gossiping,
Anonymous says2013-04-21T06:37:12.877
Report Post
Dress codes should only take place place during nutrition to avoid wasting instructional time. Students get sent to counseling office to either get a change or call hi/her parents. Counselors do not think that having the student out of the classroom is impacting the student's learning????
Anonymous says2013-05-19T15:37:15.973
Report Post
Well I say no uniforms. A lot of people say no uniforms because you need to express one self...Which is true but it's also very easy to counter that. I personally went from a none uniformed elementary school to a uniformed middle school and now back to a none uniformed high school, but they are now saying that we have dress codes to follow... Which is understandable to a point. If your butt is hanging out of your shorts than i'm sorry but that is not appropriate. Shorts that cover up should be fine, that doesn't mean that your shorts should be "mid-thigh" it just means They don't want explicit clothing because you are representing your school whether you are in the school or not! I think we should not have uniforms because I'm tired of wearing the same thing over and over again. People say it saves money but it doesn't. Whether you spend money on clothes throughout the year (for reg. Clothes) or you spend money once a year (for uniforms) you are still spending about the same amount. I think that we shouldn't have uniforms because everyone has a different culture and in a way others can learn another's culture simply by seeing how they dress. This is also a time to practice for the real world. How you present yourself in school simply by how you dress is a way to get ready for when you need to dress for getting a job or setting that positive/negative first impression. I think that we shouldn't have uniforms because uniforms are often odd colors that people don't regularly wear like navy blue or red. Green or yellow. If not odd colors it's dark colors like Black pants. Or white collared shirts.They are not comfortable they are usually nylon or polyester or some weird material instead of something like cotton. The only uniform students should have are Gym uniforms or sports uniforms so that you are representing your school! But that's as far as the uniforms should go.
Anonymous says2013-07-22T16:35:29.843
Report Post
Are you seriously telling me the only way you can express yourself is by wearing super immodest clothes? Is it not possible to express yourself without having your boobs or your butt falling out? Seriously guys
mrjf1 says2016-12-05T21:50:38.333
Report Post
Dress Codes should be implemented as strictly as possible. Dress codes instill pride and discipline.My Students and staff are required to wear a full suit and tie daily with no casual days and no weather exceptions. You come dressed to work and that's that.
crazypersona says2017-01-12T20:30:09.053
Report Post
No on school uniforms but yes on the rules like no crop tops and no baggy pants and no short shorts
Privacy Policy | Terms of Use
Sitemap | View Desktop Version
©2021 Debate.org. All rights reserved.