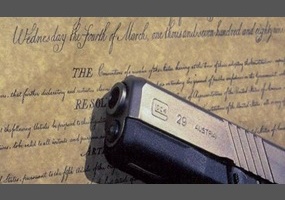 Should the 2nd Amendment be repealed?

Law, United States
Should the 2nd Amendment be repealed?
34% Say Yes
66% Say No
Load More Arguments
Leave a comment...
(Maximum 900 words)
Anonymous says2013-05-23T07:03:56.800
Report Post
People say that people kill people, not the guns. But in my opinion, it's the guns. It's the people who kills, but would the US still have over 10000 deaths each year if the law got repealed or rewritten? In other countrys, not that many are getting killed by a gun, because they do not have a law which allows them. The othe reason is because it's easy to get hold of a gun. You can buy bullets everywhere, and in some states, you'll get a free gun because you've opened a bank account. The 2'nd amendment is the problem. Stop protecting it, cause this is the problem...
Anonymous says2013-08-21T16:08:02.957
Report Post
The second amendment was written close to 300 years ago, you what guns they had then? Muskets and they were firing them at people wearing red coats, sadly times have changed and there are thousands of different guns out there. The second amendment should not be abolished but needs to be ratified quite a bit. 1st NOT ONE PERSON SHOULD BE OWNING AN ASSUALT RIFLE OR SUBMACHINE GUN OF ANY KIND THERE IS NO REASON TO HAVE IT. 2cd No one should a gun who has a family member with any kind of mental illness, special needs etc. Look at the sandy hook guy.
Quan says2013-12-31T13:55:56.203
Report Post
@Anonymous: Gun ownership is a very touchy subject for Americans, and I'd be far more worried about bloodshed if the government ever tried to confiscate legally owned and operated guns.

@Other Anonymous: There's no reason for people not to be allowed to own them, either. "Sandy hook guy" is the very rare exception, far from the rule.
Liberty4life says2016-06-15T19:56:38.440
Report Post
Tell that to the victims of Orlando.
Privacy Policy | Terms of Use
Sitemap | View Desktop Version
©2020 Debate.org. All rights reserved.