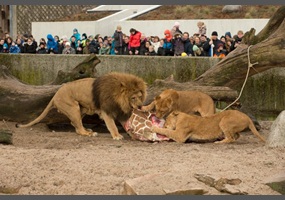 Should the Copenhagen Zoo have handled the killing of "Marius" a healthy, adult male giraffe in a different manner?

So that's what this world is coming to? Where the quality of life is measured by genetic value? Mankind sickens me.
Privacy Policy | Terms of Use
Sitemap | View Desktop Version
©2020 Debate.org. All rights reserved.