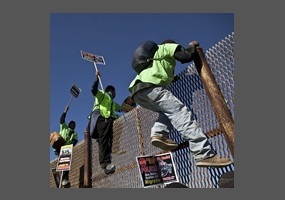 United States, Immigration
Should the U.S. have an open borders policy for migrants?
37% Say Yes
63% Say No
Load More Arguments
Leave a comment...
(Maximum 900 words)
jrdtechnologiesapps says2014-06-21T08:28:11.460
Report Post
Yes the US is not a country it is a piece of land taken over by anglo saxon whites by violence. The borders need to be take down now, and allow EVERYONE to come in, US Citizens will benefit from this because when there is not any requirement for a "Citizens " then everyone will be equal. Having a border is racist and makes anyone who can not get in feel discriminated against.
Privacy Policy | Terms of Use
Sitemap | View Desktop Version
©2020 Debate.org. All rights reserved.