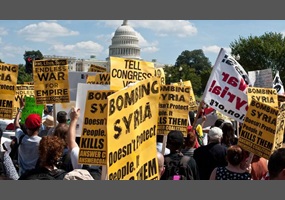 Should the U.S. intervene in Syria with military action?

United States, military, Barack Obama, Syria
Should the U.S. intervene in Syria with military action?
31% Say Yes
69% Say No
Load More Arguments
Leave a comment...
(Maximum 900 words)
Anonymous says2013-09-13T05:27:21.367
Report Post
Can somebody honestly tell me what all this is about in Syria? Is there a link to Iraq, Iran, Israel, Libya or any other countries in the Middle East? Is this about control of an oil pipeline, too? Surely, it cannot be only about the use of chemical weapons on women and children. Do not insult my intelligence! Why must the U.S. Think that it needs to be involved in the affairs of a country that does not appear to have any direct national security implications to the United States currently? What is the rule of engagement for getting involved with a violent, hostile action? Who are we indebted to, and are we being used as mercenaries so that somebody else does not have to get dirty hands? Is not there a moral responsibility, if you want to play that card, to get involved in repairing what is wrong in the United States first?
wmatychuk says2013-09-20T20:07:03.317
Report Post
More military spending = Less money, which then leads to a depression, due to having NO GOD DAMN MONEY.
wmatychuk says2013-09-20T20:07:14.457
Report Post
Which the USA already has none of.
BrandonFromCanada says2014-07-03T02:49:15.160
Report Post
I honestly can't decide.

I should probably share that I'm Canadian before posting all this, so here's my 2 cents.

For starters, it just doesn't seem right that a government can use illegal weapons to kill thousands of it's civilians, and then just... Get away with it. The Syrian rebels are trying to make those in charge pay for that, and I think that's needed. We live in a sad world if we let Assad's people get away with that all.
So, the human part of me rushes straight to the side of this that concludes that military action is necessary. But, as we saw in Iraq and Afghanistan, these things can backfire quickly.
If, in hindsight this turns out to be another 'weapons of mass destruction' thing like in Iraq, as in Assad's forces were not responsible for gas attacks, then we'd have made extreme actions on the right intentions, but without knowing all of what we could. We'll never know everything, but one of the most important things here is to determine how much we need to know before ending lives in another part of the world.
It's obvious that things in Syria need to change.
And it's also obvious that American/British/Nato involvement would tip the scales in the Rebel's favour. If we're confident that the rebels are on the right side of history here, then siding with them seems morally right. Even honourable. But if it turns out that they, or we, are wrong, then we could end up exacerbating an already massive problem. (To put it into perspective, the Syrians have lost an estimated 100 thousand people, which is around 40 per cent of the number lost by America in the second world war. )
With that figure in mind, you can hopefully grasp the gravity of the situation.

Also, not punishing mass killings of civilians feels wrong, and a lot of people, in fact, a vast majority would agree. The reasoning behind the use of military force is "If we can stop the killing of civilians, then why wouldn't we?"
Well, that's true, but on the other hand, there's no guarantee that we CAN stop the killing. In fact, if recent history has shown us anything, it's that you can't just pick a side, kill the leaders of the other side, and expect things to settle. There will always be, particularly in this part of the world, and in this specific case, another person with an opposing opinion willing to take the lead.
The only real way to stop this sort of thing is to teach (And sometimes attempt to enforce) tolerance. The only way to end the killing on all sides would be if every faction involved would just agree to not resort to violence.
But, with players like ISIS and other extremists in the mix, I doubt anyone else is willing to let down their guards.

In summary of my opinion, we don't have enough information to act on right now. (To refuse helping people in this much need on an economic principle seems disgusting). But we still need to be patient. I doubt complete 100% confirmation as to whether it was Assad behind the chemical attacks will ever come, but at the moment it seems like we need to keep ourselves from rushing in on emotion alone.
But like I said, I'm undecided. Not punishing mass killings of civilians feels wrong.

And there's my opinion, please don't hate me for it, we all have our own, and mine is no more important than yours.
Just try to be good people, everyone, that's all any one of us can do.
Privacy Policy | Terms of Use
Sitemap | View Desktop Version
©2021 Debate.org. All rights reserved.