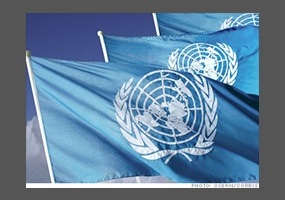 Should the United Nations have its own permanent standing army?

United States, United Nations
Should the United Nations have its own permanent standing army?
65% Say Yes
35% Say No
Load More Arguments
Leave a comment...
(Maximum 900 words)
Anonymous says2013-03-23T09:45:44.180
Report Post
If the UN had an army, I would join. I'm an Australian, and I would not join the Australian army, because I don't feel it is a useful institution (albeit a necessary one).
Anonymous says2013-03-27T00:44:16.060
Report Post
I would join. I feel that service to the UN would be deeply meaningful, given the mission the UN has is non-nationalistic and entirely based on concepts of justice, fairness, and protection of the innocent and of human liberty and dignity.
Anonymous says2013-08-29T01:23:34.687
Report Post
Noooo!!! This would be like giving Palpatine his own army... And look what happened.
Privacy Policy | Terms of Use
Sitemap | View Desktop Version
©2021 Debate.org. All rights reserved.