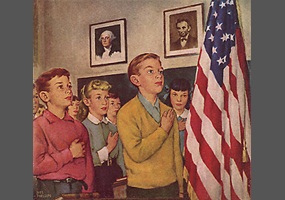 Should U.S. schools stop enforcing the Pledge of Allegiance on children?