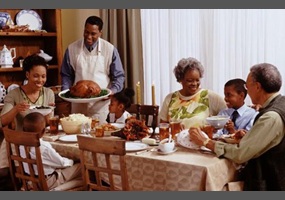 Should we celebrate Thanksgiving?

History, Thanksgiving, holiday
Should we celebrate Thanksgiving?
57% Say Yes
43% Say No
Load More Arguments
Leave a comment...
(Maximum 900 words)
themohawkninja says2013-11-27T19:09:04.167
Report Post
Where the Hell is 'no' getting their genocide arguments from? Thanksgiving is about a joint Indian-European dinner with religious undertones added from Lincoln. It is nearly the polar opposite of a genocide.
TheOncomingStorm says2013-11-27T21:00:57.087
Report Post
When you find out let me know.
ararmer1919 says2013-12-04T12:26:21.033
Report Post
Lol the no section is hilarious. And I'm pretty sure the anonymous postes are all from the same guy. They all sound way to similar in writting.
PhantomKIng77 says2014-12-01T15:33:17.660
Report Post
We were not celebrating a massacre in fact the Native Americans brought 90 WARRIORS so if we said that we would kill them. THEY WOULD KILL US. They thought that it wouldn't be a celebration but an attack.
Privacy Policy | Terms of Use
Sitemap | View Desktop Version
©2021 Debate.org. All rights reserved.