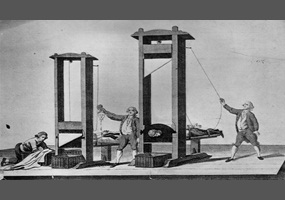 Should we use the guillotine to execute people?

Asked by: MasturDbtor
History, Guillotine, French Revolution
Should we use the guillotine to execute people?
82% Say Yes
18% Say No
Load More Arguments
Leave a comment...
(Maximum 900 words)
MasturDbtor says2013-04-10T12:18:17.030
Report Post
That's the problem. Something could throw off the aim. The guillotine makes sure it gets a clean hit.
Anonymous says2013-05-01T18:21:17.710
Report Post
O wow... Get it out of the shed, give it a good oiling but don't bother sharpening. The time for the idle rich that live of shares, in once owned public companies must end! They milk the tax payers of profit, whilst complaining WE are the ones that are living off... WHO? Ourselves.... They just want to sit in their gentleman's clubs drinking whiskey at the public's cost and getting their chauffeur to drive them back to their mansions. They have the audacity to blame us when they do nothing but rip us off. The day is coming.
Vivre la revolution...........
ymouszanon says2013-11-06T07:38:00.843
Report Post
Many people confuse reason with their emotions or sensitivities. For example: the majority feels we have progressed to humanely treating the "mentally ill" with drugs. They look like benign pills or injections. However anti-psychotic drugs have caused more misery, pain, suffering, human organ destruction, shortened life span and sudden death than the more visible cruel psychiatric treatments of the past. If you see no evil that upsets you, than most are apt to ignore the wrong. Personally I think execution and long or life sentences in solitary confinement(imho worse than death) are just another wrong, and even more immoral because it is carried out by the state. "Another wrong does not make a right".

Even though i abhor all murder, but for the sake of argument, It would seem that the guillotine is still the most humane form of execution. Again, most people are against simply on protecting their emotions from a gruesome and bloody sight. Again it is the public prevailing confusion of reason and emotions or sensibilities. Thus the public accepts lethal injection because their conclusion is that it is a humane killing. However there have been many cases where the person to be execute becomes aware because the first induced medical coma(e.G anesthesia) drug is insufficient or the killing drugs are so painful that it wakes them to consciousness, even though they cannot move because of the second paralyzing drug. Indeed there have been just as or more painful execution methods then lethal injection but being decapitated is not one of them.

A somewhat digression: the history of human civilization has been the "march of time" a continuous jack boots ankle to over the head deep in misery, murder, war, exploitation, etc. Indeed intelligence has led to many creations to make life better for humanity. However technology seems to be but to nefarious means. For example the industrial revolution led to weaponry that has raised kill counts astronomically as happened in the first and second world wars. Today technology is used to spy on everyone; make so called pin point drone killing of "terrorists"(where the kill count includes many more children and innocents than suspected terrorists(odd how we never see the fact that terrorism including 911 was a response not a cause), and so on.

I do not belive human nature in its naked form is brutal. Anthropology shows many examples of prehistoric and historic communities that were cooperative and loving. IMHO, It is the social evolution of hierarchy and power of a few over the many is the mother of misery.

"what the world needs now is love..."

ymousz anon
male
usa
Matthew_Picchu says2015-02-19T01:59:36.147
Report Post
If I had a choice of how I would be executed, I would choose the guillotine. It's quick, easy, and painless (the spinal cord is severed and the brain stem damaged, so the brain can no process pain). Also, it'd be really neat to experience my head being removed from my body, falling into a basket, and the being picked up and held aloft to a crowd of people cheering for my death. Then the loss of blood and oxygen would shut down my brain and do me in for good. It's just preferable over the electric chair, firing squad, lethal injection, and hanging. While those can all go horribly wrong, the guillotine gets it right every time. Quick, painless, and a really cool thing to put on your gravestone and for your relatives to talk about. "Why yes, Jimmy, your uncle was beheaded by guillotine. No, it wasn't like it is in the cartoons. It's a lot more gory, little Jimmy."
Privacy Policy | Terms of Use
Sitemap | View Desktop Version
©2021 Debate.org. All rights reserved.