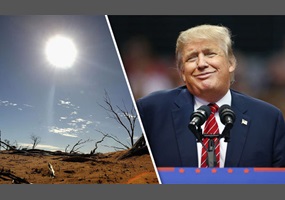 Trump's Official Stance: Will Climate Denial hurt our chances at protecting the planet?