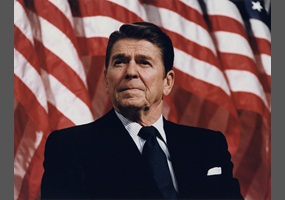 Was Ronald Reagan the best US President so far?

Asked by: RepublicanMan
Ronald Reagan, United States, History
Was Ronald Reagan the best US President so far?
33% Say Yes
67% Say No
Leave a comment...
(Maximum 900 words)
bubbatheclown says2014-02-01T21:23:01.563
Report Post
That all depends on what you're looking at.
For instance, he brought down the Soviet Union and ended the Cold War, but he also brought the US National Debt into the trillions, a trend that our leaders are continuing today on a more radical scale. But for how much he increased the national debt his economic policies clearly worked, considering that the 1980s was a golden time for the US.
I think that his support of the Afghan Mujahideen was a HUGE mistake which would come to haunt us years later. After all, the successor of the Mujahideen is the Taliban. And the Soviet Union would've fallen without the US supporting the Mujahideen. If the Soviets did establish a communist government in Afghanistan, it would've at least been stable. Supporting the Mujahideen was probably the biggest mistake of his presidency, I think. But then again, his predecessor, Jimmy Carter, was the one who initiated US support for the Mujahideen.

Overall, I think he was a good president, but it'd be a stretch to call him the best president in US history. Don't forget about great men like Thomas Jefferson, who doubled the US's size for $15 million, or Abraham Lincoln, who ended slavery in the US and held the Union together, or the presidents who carried us through WWI and WWII. One thing's for sure, though: he's way better than Obama.
Privacy Policy | Terms of Use
Sitemap | View Desktop Version
©2020 Debate.org. All rights reserved.