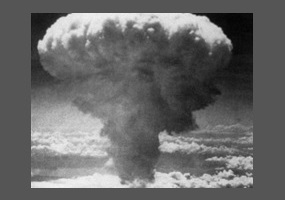 Was the U.S. justified in dropping bombs on Hiroshima and Nagasaki?

"It is always wrong to boil a baby even if lives are saved thereby."
Anonymous says2013-04-10T01:23:26.157
Report Post
I'm sorry for all those kids who are affected by Japan's decisions, but I lose respect for those who are super bias and think Japan didn't have it coming, need I say coming the SECOND TIME as well
Anonymous says2013-04-22T05:11:40.990
Report Post
Something all of you should look into is that the United States provoked the war with Japan, not the other way around. Pearl Harbor wasn't the first swing, the war with economics and resources was.
Anonymous says2013-04-22T17:58:58.663
Report Post
Thus the altitude would be around 15,00 feet so the Clanmi would have dropped it on us because the alitude was high.
Anonymous says2013-05-08T21:39:19.947
Report Post
Yes, Japan was not playing by the rules of war, but two wrongs never make a right. No matter what good could have come out of the dropping of the atomic bomb, killing innocent civilians was not justifiable, and it never will be. America justified itself by saying that it would save the lives of our boys. What we forgot is that our boys were fighting in this war because of the horror we experienced at Pearl Harbor, where soldiers and sailors, belonging to a country then on peace terms with Japan, were blown to bits. Those Americans that died were innocent, the remaining were horrified. And what do we do with that just anger? At the end, instead of negotiating peace, we demand unconditional surrender. Japan refused. Historians sneer at Japan for not surrendering sooner, but it would be suicide itself to surrender to a country that granted its defeated enemy no certainty of how it was to be dealt with. America did not back down on its terms. Unconditional surrender was what we required, and we would take no less. So even though we were justified in partaking in war with Japan, we used that justification to do wrong: (1) demand unconditional surrender, and because they would not accept, (2) drop the atomic bomb on Hiroshima and Nagasaki. We justified it then and still try to justify the obvious wrong of vaporizing thousands of innocent men, women, and children, including 23 American prisoners of war. This is not morally acceptable, and how we try to clean our consciences of the blood bath is pathetic. Common sense points out to the facts that backup this view… Hiroshima and Nagasaki were of limited military value; civilians outnumbered troops in Hiroshima SIX to one. The radiation effects are still suffered TODAY, not only causing Leukemia and other diseases, but leaving land unfertile and unless for the Japanese people.
Anonymous says2013-05-11T00:54:42.233
Report Post
The bombs, put together, incinarated approximately 100,000 people within seconds. About 60,000 died during the next month because of overdosages of radiation. I don't think the U.S had a right to bomb Japan. First of all, they should have picked their targets better. Hiroshima, especially, was not a major military base, but rather, a densely populated civilian area. Moreover, the bomb had many acute and long term effects, including leukemia and cancer. The bombs contaminated water and soil within a large area, preventing people from eating and from living in those areas. It is true that Japan attacked Pearl Harbor without warning, but at least Pearl Harbor was a major military target. Also, Regular warfare which Japan used in very different from nuclear weapons, which an be seen when you compare civil casualties: 68 vs 180,000.
Finally, Japan was actually attempting to surrender before the bombs. They had asked the ussr to intercede for them, saying that they would surrender I f allowed to keep their emperor. The u.S, however, proceeded to bomb, wishing for unconditional surrender. After the bombs, the us gave Japan the terms they first refused, so they basically said "yeah, we will accept your terms after we blow up a couple of cities".

If you have a terrible weapon in your hand, the morality of tool use should demand you do not use it until you are in extremis. The u.S was definitely not in extremis. They were winning in Europe, were beating the axis powers in men and resources, and finally, their Russian ally was ready to join war against Japan. So, the only reason left for dropping those bombs would be murderour vengeance.

Many people say it saved millions of life's, but this so called fact is absolutely ludicrous. Studies done at the time, which were shown to president Truman, showed that it would take about 47,500 soldiers to invade Japan.
Anonymous says2013-05-11T22:28:29.350
Report Post
Pearl Harbor was a strategic assault, engaging and destroying military assets. The troops that died there were hardly innocent; they swear allegiance to their flag, just as any other military staff would do. This flag had already committed political and economic hostilities against Japan, and a military conflict as the next escalation of this event. Pearl Harbor cannot at all be used as justification for the destruction of civilian locations by the nuclear bombings.
Anonymous says2013-05-28T00:44:18.830
Report Post
I think that the dropping the bomb was a mistake. Sure, it saved plenty of american and japanese SOLDIERS, but innocent people are a lot different. We are talking about women and children here.
GeekiTheGreat says2013-05-31T13:52:43.063
Report Post
People who are saying no really do not know what they are talking about.
Anonymous says2013-06-03T23:46:58.490
Report Post
Every human being is selfish. Americans and japanese alike. They couldve stopped everything and had an actual conversation like REAL civalized people. But no. Destroy thousands of lives and cause two atomic bombings that couldve been prevented.
Anonymous says2013-06-04T15:54:26.393
Report Post
The actions of the Japanese that led up to us leveling a couple of their cities were not justified either. They asked for it. It was not justified, but acts of war rarely are. But all's well that ends well. America and Japan get along pretty well considering World War II wasn't all that long ago.
Anonymous says2013-06-10T10:00:59.380
Report Post
Any justification of USA's nuking of Japanese cities justifies USA's cities getting nuked.
NoorAli says2014-03-11T15:41:13.633
Report Post
A Barbarian Act.Smoking out innocents in a matter of seconds with no thought of diplomacy and politics, completely Barbarian. Power is something that has always been either in the East or in the West, but no one on earth has killed innocents than United States.
SweetTea says2014-03-25T18:41:29.377
Report Post
In war, it isn't any country's job to consider the casualties suffered by the enemy. Collateral damage, or civilians, have been killed in every war throughout history. It's an unfortunate reality. Japan started the war with the U.S., when they attacked Pearl Harbor. Truman finished the war, with Nagasaki & Hiroshima. We were at war & the bombings were justified.
David48 says2015-08-06T21:31:34.777
Report Post
From a British point of view, the British fought the Japanese in Burma( as our great American allies fought them in other areas of south east asia and the Pacific islands) I spoke to a veteran who was in the Chindits( google it). Who fought them, he said ' They will never surrender, we had to kill all of them, in battles, so the bomb was the correct thing to do', we must ask the generation of people that actually fought them what they think, because their opinion must be respected
Privacy Policy | Terms of Use
Sitemap | View Desktop Version
©2022 Debate.org. All rights reserved.