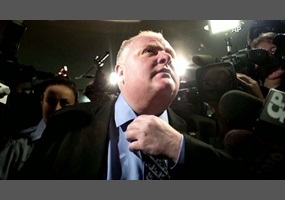 Was Toronto mayor Rob Ford out of place in Hollywood during the Academy Awards?