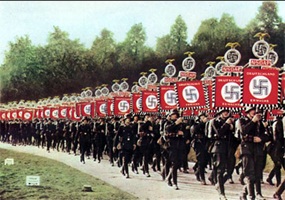 Were Nazis as bad as we were taught to believe?

Asked by: RepublicanMan
World War II, Politics
Were Nazis as bad as we were taught to believe?
25% Say Yes
75% Say No
Load More Arguments
Leave a comment...
(Maximum 900 words)
RepublicanMan says2014-02-02T19:08:31.620
Report Post
Realistically at either end of the spectrum, the Nazis were some of the worst militaristic power pigs ever to face the planet power-wise. They eliminated 12-13 million innocent people from the face of the Earth in the six years of WWII and the Holocaust. We can argue either side, but more realistically what the Nazis did was in simple definition death on a massive scale. They ruined the planet for generations after the Holocaust. In fact, several genocides took place after the Holocaust because of the problems the Nazi Regime caused. People are still killing each other in Africa because of it! Ever here of the Rwandan Genocide? Yeah, well, the Axis invaded a lot of Northern Africa, which costed many thousands of lives in that area. And since, Africa has fallen apart in several ways. Some parts of Africa lack a stable government. Also, Germany is still in somewhat economic ruins and some laws in Germany are based around Nazi Prevention...That's how bad the Nazis were, they literally made laws in Germany preventing the Nazis from coming back to political power.
Privacy Policy | Terms of Use
Sitemap | View Desktop Version
©2020 Debate.org. All rights reserved.