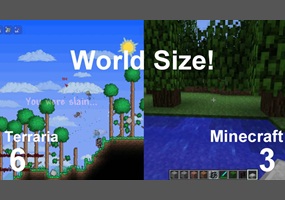 Which is better: Minecraft (Yes) or Terraria (No)?