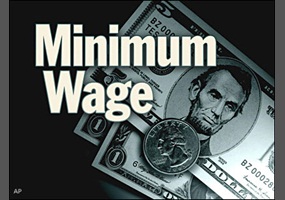 Will raising the minimum wage result in higher costs for consumers as companies struggle to cover the payroll difference?