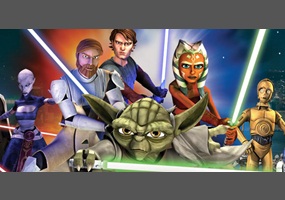 Will you be watching the animated "Star Wars: Clone Wars" now that it's going to be on Netflix?