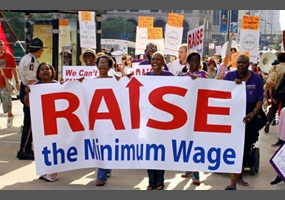 Would raising the minimum wage really solve the poverty problem (yes) or just create new ones (no)?