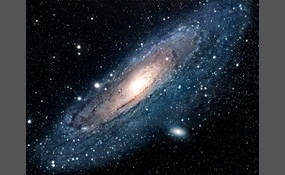 (Atheists) Ignore the bible, suppose a god started the big bang and evolution, could you believe that?

kman100 says2015-04-30T21:58:19.1091374-05:00
Report Post
I see no reason to believe that. If someone were to give me evidence that these claims are true I would believe them, but no one has done so. Additionally, God can't "start" evolution. Claiming that he can demonstrates an ignorance of how evolution works. Evolution is simply a change in an allele frequency in a population, and doesn not require "starting" by a deity.

MrFox says2015-05-01T03:16:10.7124420-05:00
Report Post
I could believe anything if it's supported by sufficient proof to match the claim that is made. A complex intelligence starting the universe just makes no sense and is totally made up to justify faith, instead of as an explanation of reality.

ThinkAlways says2015-05-01T13:43:24.8080651-05:00
Report Post
It is more plausible and easier to suggest that a higher intelligence started all of this than to argue for a specific religion. But it's still a terrible argument. It violates Occam's Razor and doesn't answer the question it's supposed to solve (how complexity can come from nothing). A God would be a highly complex being, so you still have the problem of how the complexity of God could have either came from nothing, or existed eternally without a beginning.

evolutioniscrushed says2015-05-01T15:20:13.2158833-05:00
Report Post
The bible has been proven true, so has been the One True God, and the evolutionary mutations could not be great enough for apes to evolve into humans. Now let me explain the big bang theory: If pennies were stacked up to outer space across the earth, and 3 of those pennies had an X on them, the 3 pennies with an X are the chance that the big bang theory is true. But even that isn't enough. The big bang was completely disproved, and therefore has no chance to be true, but the penny comparison was still an accurate measurement in the eyes of and evolutionist.

Yes and no are two words for expressing the affirmative and the negative, respectively, in modern English.English originally used a four-form system up to and including Early Middle English but Modern English has reduced this to a two-form system co... nsisting of just 'yes' and 'no'. Some languages do not answer yes–no questions with single words meaning 'yes' or 'no'. Welsh and Finnish are among several languages that typically employ echo answers rather than using words for 'yes' and 'no', though both languages do also have words broadly similar to 'yes' and 'no'. Other languages have systems named two-form, three-form, and four-form systems, depending on how many words for yes and no they employ. Some languages, such as Latin, have no yes-no word systems.The words yes and no are not easily classified into any of the eight conventional parts of speech. Although sometimes classified as interjections, they do not qualify as such, and they are not adverbs   more
10 votes
5 comments
Yes - Voter Comments

TheDev1 says2015-04-30T23:24:54.0774684-05:00
Report Post
I am saying yes not because the scenario is plausible, but because with our current knowledge, it is possible. If you asked me if a monster that resembled Cthulhu existed on a different planet, I would be forced to say the same thing: It is possible but not plausible.

Macfoo says2015-07-02T12:33:16.9396032-05:00
Report Post
a lifeform smart enough to start the big bag and to nurture evolution is possible. But gods 0% involvement since leads me to a few conclusions. We are just animals and this creation wasn't for the purpose of mankind weather on purpose or by accident. If he exists and he is jesus then he is incompetent as a leader. And where is Satan? Oh dark one I will sell my soul for a golden fiddle. Lol nope guess he is too busy to ever visit earth either. I'm going to just be happy and if I'm wrong no problem I'll go to anyone's version of heaven. I am good for goodness sake . if there is a god its me

TBR says2015-05-01T09:13:36.3360667-05:00
Report Post
@MrFox above makes this point well. My answer was in hopes this would become a conversation, but the OP seems to have abandoned it. The point is, if there is a god who "started the big bang and evolution" then it needs the same proof. The same simple logic apply if it is the God of the Bible, or some other god.