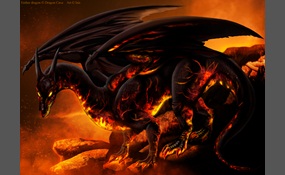 (I AM BORED, SO MADE THIS) Which mythical creature is the best?

Which of these mythical creatures is the best?

A dragon is a legendary creature, typically with serpentine or reptilian traits, that features in the myths of many cultures. There are two distinct cultural traditions of dragons: the European dragon, derived from European folk traditions and ultim... ately related to Greek and Middle Eastern mythologies, and the Chinese dragon, with counterparts in Japan, Korea and other East Asian countries.The two traditions may have evolved separately, but have influenced each other to a certain extent, particularly with the cross-cultural contact of recent centuries. The English word "dragon" derives from Greek δράκων, "dragon, serpent of huge size, water-snake"   more
14 votes
3 comments
Dragon - Voter Comments

A hellhound is a supernatural dog in folklore. A wide variety of ominous or hellish supernatural dogs occur in mythologies around the world, similar to the often seen dragon. Features that have been attributed to hellhounds include black fur, glowin... g red – or sometimes yellow – eyes, super strength or speed, ghostly or phantom characteristics, foul odor, and sometimes even the ability to talk. Certain European legends state that if someone stares into a hellhound's eyes three times or more, that person will surely die. In cultures that associate the afterlife with fire, hellhounds may have fire-based abilities and appearance. They are often assigned to guard the entrances to the world of the dead, such as graveyards and burial grounds, or undertake other duties related to the afterlife or the supernatural, such as hunting lost souls or guarding a supernatural treasure. In European legends, seeing a hellhound or hearing it howl may be an omen or even a cause of death.Some supernatural dogs, such as the Welsh Cŵn Annwn, were actually believed to be benign. However, encountering them was still considered a sign of imminent death   more
3 votes
1 comment
Hellhound - Voter Comments

The griffin, griffon, or gryphon is a legendary creature with the body, tail, and back legs of a lion; the head and wings of an eagle; and an eagle's talons as its front feet. Because the lion was traditionally considered the king of the beasts and ... the eagle the king of birds, the griffin was thought to be an especially powerful and majestic creature. The griffin was also thought of as king of all creatures. Griffins are known for guarding treasure and priceless possessions. Adrienne Mayor, a classical folklorist, proposes that the griffin was an ancient misconception derived from the fossilized remains of the Protoceratops found in gold mines in the Altai mountains of Scythia, in present day southeastern Kazakhstan, or in Mongolia. In antiquity it was a symbol of divine power and a guardian of the divine   more
3 votes
0 comments
Griffin - Voter Comments
No Comments
Vote & Comment
4

Any other mythical creature.
3 votes
2 comments
Other - Voter Comments

The unicorn is a legendary animal that has been described since antiquity as a beast with a large, pointed, spiraling horn projecting from its forehead. The unicorn was depicted in ancient seals of the Indus Valley Civilization and was mentioned by ... the ancient Greeks in accounts of natural history by various writers, including Ctesias, Strabo, Pliny the Younger, and Aelian. The Bible also describes an animal, the re'em, which some translations have erroneously rendered with the word unicorn.In European folklore, the unicorn is often depicted as a white horse-like or goat-like animal with a long horn and cloven hooves. In the Middle Ages and Renaissance, it was commonly described as an extremely wild woodland creature, a symbol of purity and grace, which could only be captured by a virgin. In the encyclopedias its horn was said to have the power to render poisoned water potable and to heal sickness. In medieval and Renaissance times, the horn of the narwhal was sometimes sold as unicorn horn   more
1 vote
0 comments
Unicorn - Voter Comments
No Comments
Vote & Comment
6

A centaur or hippocentaur is a mythological creature with the head, arms, and torso of a human and the body and legs of a horse.In early Attic and Beotian vase-paintings, they are depicted with the hindquarters of a horse attached to them; in later ... renderings centaurs are given the torso of a human joined at the waist to the horse's withers, where the horse's neck would be.This half-human and half-horse composition has led many writers to treat them as liminal beings, caught between the two natures, embodied in contrasted myths, both as the embodiment of untamed nature, as in their battle with the Lapiths, or conversely as teachers, like Chiron.The centaurs were usually said to have been born of Ixion and Nephele. Another version, however, makes them children of a certain Centaurus, who mated with the Magnesian mares. This Centaurus was either himself the son of Ixion and Nephele or of Apollo and Stilbe, daughter of the river god Peneus. In the later version of the story his twin brother was Lapithes, ancestor of the Lapiths, thus making the two warring peoples cousins   more
0 votes
0 comments
Centaur - Voter Comments
No Comments
Vote & Comment
No comments yet.
Leave a comment...
(Maximum 900 words)
Privacy Policy | Terms of Use
Sitemap | View Desktop Version
©2020 Debate.org. All rights reserved.